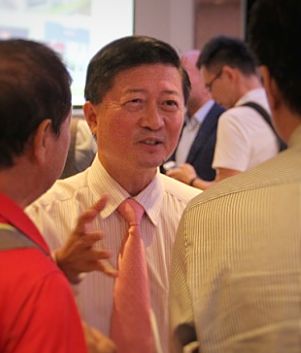 Executive Chairman Tan Wang Cheow. File photo by Ong Chin Keet.It was a matter brought up at the FY2018 AGM held this year, given that Indochina revenue had grown substantially but the bottomline for that region was in the red.

While Vietnam suffered losses for several years before taking off, Myanmar didn't look like it would be the next success.

The 9M2019 net margin has notably risen from 7.1% to 9.7% while the gross margin has stayed pretty much where it has been in recent years at approximately 40%.

Given this backdrop, one can appreciate that:

It's a figure that approximates recurring profit as so far in 9M2019, Food Empire has had an unusually calm overall forex situation, reporting a minor US$125,000 in forex loss.

(Forex volatility is typically the key non-recurring feature of the company's income).

If the US$25.3 million turns out also to be the net profit attributable to equity shareholders, then it would be 40% higher y-o-y over the US$18.1 million achieved in 2018.

But don't get the idea that, after Myanmar, Food Empire will not try other emerging markets.

In fact, it is already dipping its toes into the Phillipines.

In the meantime, its multi-pronged diversification strategy is manifesting itself in the form of a second coffee plant in India. It has just been completed at a cost of US$50 million, and will become operational in 2Q2020.

We have 1186 guests and one member online