This article was first published in the October 2019 International edition of Accounting and Business magazine, and is republished with permission.

A self-described late bloomer, Amos Ng admits that upon completing his A-Levels, he was at a loss as to which career path to embark on. Fortunately, a career counsellor identified his aptitude for numbers and suggested the ACCA Qualification. Ng decided to follow his advice, which provided him with the training necessary to excel and eventually become the group CFO of Singapore Exchange-listed tourism company, Straco Corporation. 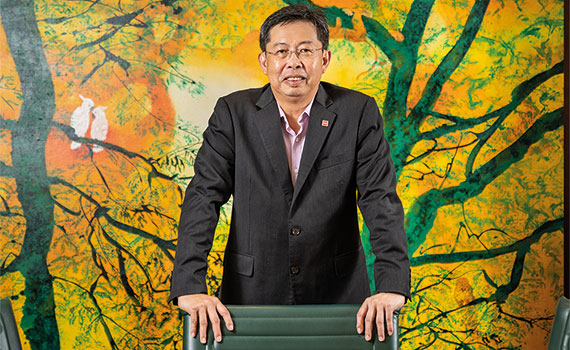 In addition to his gift for dealing with numbers, Ng’s other big passion is working with people. So, it was no surprise that a year into his first job as an auditor at Coopers & Lybrand, his managers felt that his analytical and problem-solving mindset coupled with his people skills would serve him well in management consultancy, where he was able to build up his experience in initial public offering (IPO) projects and restructuring.

While at Coopers & Lybrand, Ng also began to hone his people-centred strategy to doing business – something that would become a defining part of his working style. ‘As I worked with clients to solve their business problems, I learnt that no matter how complex the issue, there was always an amicable solution for all the parties involved,’ he says.

Ng adds that even though many see the key value of accountants in analysing the business from a straight, hard-facts perspective, there was also much that could be achieved with good people skills.

‘I believe that you can get a lot of things done through consensus building, collaboration and negotiation,’ he says. ‘Put yourself in the other person’s shoes, so that you don’t let him get off the negotiation table feeling that he has lost a deal. Aim for a win-win situation. It takes investment of time and patience, but it’s definitely achievable.’

One example of where his people-oriented approach proved useful was when he was posted to China as the general manager of a subsidiary logistics company. There, he experienced stark differences between the working styles in China and Singapore.

‘After some time, however, you realise that while the communication style and sequence of doing things may be different, everyone’s objective ultimately is to just get the job done. Building trust and rapport was critical in that situation,’ says Ng.

When Ng was first posted to China in 1999, he thought the transition would be simple. However, he soon discovered that aside from having to pick up new business and technical terms in Mandarin, he also had to develop a different approach and mindset when dealing with this new market.

‘I had to learn to be sensitive to the cultural differences and work at a different pace from what I was used to,’ Ng recalls. ‘In terms of international standards, Singapore was a couple of years ahead but the Chinese were very hungry to learn. That stint in China definitely helped me to have more empathy and to see things in perspective.’

Despite the challenges, Ng is grateful for the experience. ‘Being thrown into the deep end in China means that you are forced to pick up things faster,’ he says. ‘By the end of it, I was much better at reviewing Chinese documents and negotiating in Mandarin.’

By the time Straco approached Ng in 2000, he had built up the perfect resume for the proposed role. Not only did he possess the skills necessary to help the business restructure and go for IPO, he also had the language skills and experience needed to manage the finance function of a company that had the bulk of its tourism assets based in China.

While in his younger years, Ng prioritised his time and efforts on building his career and providing for his family, around 10 years ago he became actively involved in volunteering. Today he helps out in various investment, finance and audit committees for non-profit organisations such as the Singapore Chinese Cultural Centre and the Singapore Autism Association.

Additionally, Ng also gives back to the profession through participation in various accounting-related committees. These include Singapore’s Accounting and Corporate Regulatory Authority, where he is a member of the practice monitoring sub-committee.

His most active role, however, is with ACCA, which is where his spirit of volunteerism was first kindled. After becoming a member of the local executive committee in 2011, Ng went on to hold various office-bearer positions, including as chairman of the ACCA Singapore Network Panel from 2015 to 2017.

He shares that his motivation for involvement stems from two areas. The first relates to his personality: if he is going to get involved with something, he wants to go ‘all in’. The other comes from a sense of gratitude for what ACCA and the profession has given him. ‘ACCA is in a way my only academic qualification, and I have had the privilege to really benefit from this globally recognised programme,’ he shares.

While Ng is quick to play down his efforts in contributing to ACCA Singapore’s growth during his chairmanship, he does acknowledge that the team collectively has done a great job in increasing the engagement of members.

‘When I first joined, it was quite difficult to get people to step forward and serve,’ he recalls. ‘What is heartening is that over the last two to three elections, we have seen the appearance of more candidates than vacancies.’

Ng has since gone on to become a member of ACCA’s Global Council, which is responsible for governance of the organisation at the international level. He sees the role as providing him with a voice to represent Singapore and the wider region.

‘I believe that Singapore has a lot to share and contribute,’ he says. ‘The growth of ACCA here over the past 83 years is in many ways similar to the growth of Singapore. Multicultural in outlook and resilient in nature, Singapore and ACCA share many of the same building blocks.’ 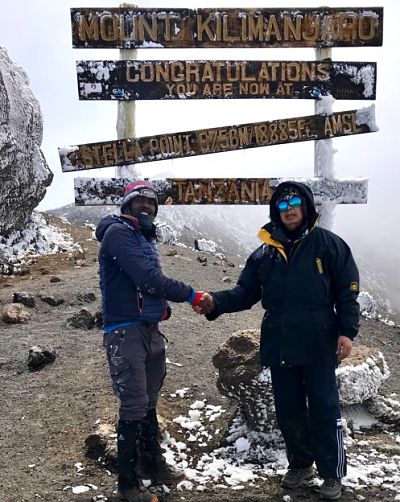 Amos atop Mt Kilimanjaro in Tanzania in 2018.Ng is a big believer of positive thinking and this is demonstrated in his attitude towards challenges. ‘Throughout my career, I have never said “no” to any new assignments or appointments,’ he says. ‘I take it as a challenge and believe that there’s nothing that cannot be overcome.’

It is perhaps  fitting that outside of work, two of Ng’s biggest passions are long-distance running and mountain climbing. For the latter, his most notable conquest was of Mount Kilimanjaro in Tanzania in 2018. He notes that many workplace skills are relevant for overcoming the challenges that lie on the way to the top, and draws on ACCA’s seven quotients. ‘Things like technical skills and vision certainly come into play,’ Ng says. ‘These are certainly things that can help you when trekking in unfamiliar terrain.’

Another parallel that he sees with outdoor activities and marketplace challenges is the fear of failure and the temptation to give up. The solution, he shares, is to persevere and return to basics. ‘Instead of trying to rush or widen your stride, go back to your cadence with regular small steps and breathing,’ Ng says. ‘It’s the same in the working world. Sometimes you may feel overwhelmed by corporate failures or the mismanagement of previous shareholders. At times like this, you just have to get back to basics, to cost structure and the business model. You will find that all these back-to-basic strategies work wonders.’

Today, as a mentor to younger finance professionals, Ng believes that he is leading by example to show them the importance of maintaining a healthy work-life balance and staying positive.

‘Some people are affected by their past failures and don’t have enough confidence in themselves to move forward,’ he says.’ But always remember that if you don’t take that next step, you will never know what could have turned out. Have faith in your ability; the rest is about seizing opportunities as they come along.’


Straco Corporation was listed on the mainboard of the Singapore Exchange in 2004. The group went on to become one of the first foreign companies to build up significant presence and influence in China’s tourism industry. The group showcases high-quality tourism-related projects, incorporating entertainment, education and culture to create a unique experience for visitors and audiences. Projects include giant observation wheels, large-scale public aquariums, cable-car facilities, and the protection and redevelopment of historical sites.

We have 312 guests and no members online