RIVERSTONE: Rare bumpiness in 3Q but things have gotten smoother

Most of the cost increase was absorbed by Malaysian-based Riverstone, instead of being passed on to its customers, in view of the stiff competition among similar producers.

"This had the most serious impact on our gross profit," said Mr Wong. 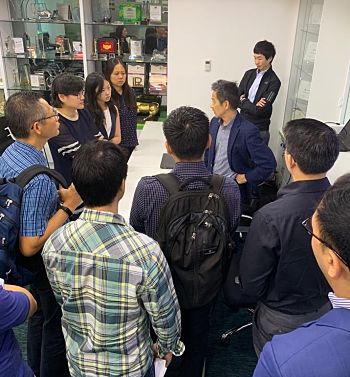 Investors with Mr Wong Teek Son after the 3Q18 results briefing. Photo by Kamal Samuel.♦ Labour shortage, resulted in payments for overtime work. This added 10% to the labour cost, or RM1 million.

♦ Sales mix shifted: The revenue jump in 3Q was attributed mainly to healthcare gloves, resulting in the company's product mix being 83:17 (healthcare gloves versus cleanroom gloves), instead of 80:20.

Cleanroom gloves, because of their far superior margins, contributed over half of Riverstone’s net profit.

In 4Q: Raw material prices have softened -- by over US$100/tonne since Sept, according to Mr Wong.

And Riverstone has hired about 200 new foreign workers for its new plant.

Furthermore, the USD, the currency Riverstone sells in, has strengthened slightly, translating into more ringgit for the company.

"Overall, competition in the healthcare segment is tough because of new production capacity. But, thanks to support from customers, our new plant capacity is taken up until January."

We have 1000 guests and no members online