Robust demand growth outlook affirmed
We hosted an NDR for RSTON in KL on 13 Aug 2018, during which investors displayed a keen interest in the company. We stay positive on its earnings growth outlook as RSTON is on track to raise annual production capacity by 18% to 9.0bn gloves by end-FY18F and subsequently, to 10.4bn by end-FY19F. 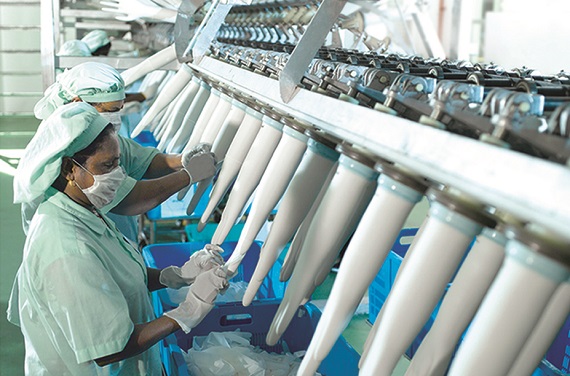 Riverstone has 55% of the global market  for customised cleanroom gloves. NextInsight file photo. Utilisation remains at optimal 90% and is likely to be sustained with the capacity expansion, prompted by huge order backlog and robust demand growth outlook for its cleanroom and healthcare gloves.

Key differentiator is its premium cleanroom gloves
RSTON believes it has 55% of the global market share for customised cleanroom gloves (Class 10 & 100), counting Ansell (ANN ASE, Not Rated) and Kimberly-Clark (Unlisted) as its closest competitors.

The segment accounts for c.20% of volume output in 2Q18 but contributed over half of RSTON’s net profit due to its ability to command higher margins for cleanroom gloves.

Its key markets are Asia Pacific countries, where RSTON sells directly to customers that mainly deal with smartphone lenses, car sensors and batteries.

Expect strong sales growth for healthcare gloves
The segment registered over 10% yoy gain in shipment volume and accounted for 80% of total glove output in 2Q18. Key markets are the US and Europe, where RSTON’s gloves are mainly used as examination gloves in healthcare. Management is optimistic that the strong demand for its healthcare gloves would be sustained in light of continued growth in global glove demand and rising customer trust in quality of RSTON’s gloves.

On track to expand capacity by 18% in 2H18
Commissioning of new production lines began this month under Phase 5 expansion of its Taiping facility, which will see RSTON’s annual glove capacity expand from 7.6bn at endFY17 to 9.0bn by end-FY18F. Construction of Phase 6 has commenced. According to the company, Phase 6 will lift its annual capacity to 10.4bn gloves. RSTON’s robust balance sheet (RM70.5m net cash at end-Jun 2018) will support further capacity expansion.

Laggard play compared to peers
We view RSTON’s current 14.3x FY19F P/E as undemanding, representing over 30% discount to its Malaysian peers’ average (ex-Hartalega) of 20.5x. Given the accelerated core EPS growth of 13.1-16.5% in FY18-19F (based on our estimates) on stabilising margins and capacity expansion, we think RSTON is relatively cheap.

We have 1133 guests and no members online