DISA: " Now at an inflection point and will become market leader if ...."

Maybank Kim Eng put out an impressive 14-page report on DISA in April 2017  (click here) but there was no follow up report.  Now comes a 16-page initiation report by KGI Securities, excerpts of which are below. (In between, in Jan 2018, we wrote two articles, one of which is: DISA: Solution is "The Next Big Thing in Retail," says Walmart) 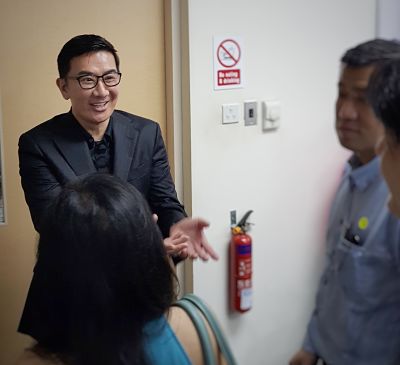 Eddie Chng, CEO, speaking with shareholders after DISA's FY2017 AGM. NextInsight photo. In aggregate, these will be driven by a diminished increase in staff costs and an improving operating leverage.

SKUs and Barcodes: We estimated the total potential SKUs of 3 large US retailers (including Walmart) endorsing DISA’s anti-theft technology, based on the average SKUs available at a large retail store in the United States. Our assumptions include a minimum of 100 items per SKU annually, which translates into 100 barcodes per SKU per annum.

From these assumptions, we estimated a combined minimum of 771 million SKUs per annum and a minimum of 77 billion barcodes which could be available to DISA.

However, since food products are unlikely to use the technology due to costs and practicality reasons, we believe that DISA can only capture a portion of the combined SKUs or barcodes.

By 2019F, we expect higher supplier penetration rates due to the increased number of retailers endorsing DISA’s technology, resulting in sales of 115 million barcodes.

We have 1475 guests and no members online