This graphic illustrates clear benefits of the ATM solution compared to how things are done now: 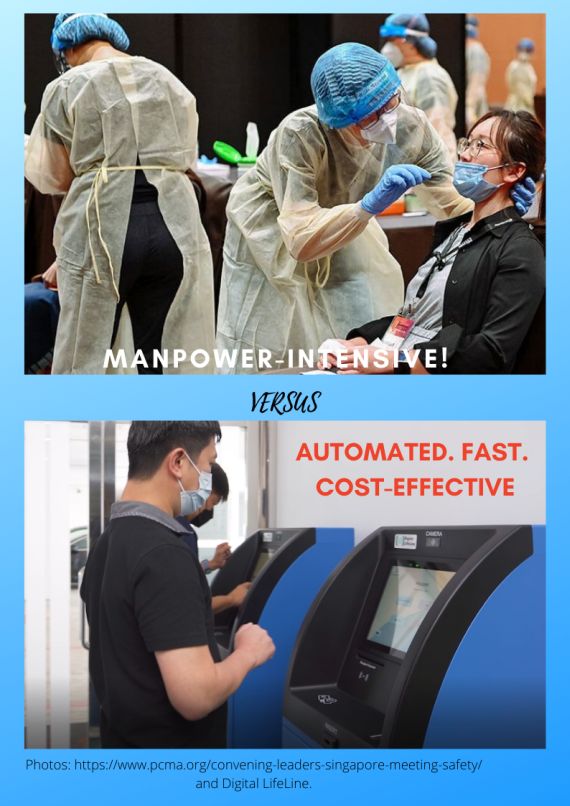 The ATM looks set to be the second of Eddie Chng's notable innovations, or what might be called disruptive innovations.

The first is a security solution known as Point-of-Sale Activation, which has been adopted by Walmart, the largest retailer in the world.

The solution is found in its 5,000 stores across the US for a range of electronic products, resulting in millions of dollars of savings a year from fraud.  (Read more here)

Speaking with NextInsight, Eddie said the ATM-for-mass-testing idea germinated in his mind after he was struck by scenes of mass-testing using ART kits at workers' dormitories.

The process was cumbersome as it involved large numbers of staff, lots of administrative work to record results, and potentially could even be faked.

With his background in automation and engineering, he started to design the ATM and had 4 prototypes produced in China.

"This is exactly what healthcare providers need because they have a manpower crunch.  They have to hire so many people to do the swabbing, to do supervision, to do registration, to do recording. Very laborious."

Fortuitiously, towards the end of 2021, he heard about a breakthrough by top Singapore institutions -- SingHealth Duke-NUS Academic Medical Centre and the National University of Singapore -- in developing saliva-based ART kits.

The tests are said to have high accuracy rates matching that of the gold standard, PCR tests.Eddie reached out to the scientists (or principal investigators as they are also known) and won them over with his idea that the saliva-based kits be commercialised along with the ATMs. Don't go down the route of just selling the kits to Watson's and the like, he told them.

Thus, Digital Life Line Pte. Ltd. was set up as a subsidiary of DiSa to carry out the business after it signed an agreement with the co-developers for exclusive rights to manufacture and distribute the new kits. 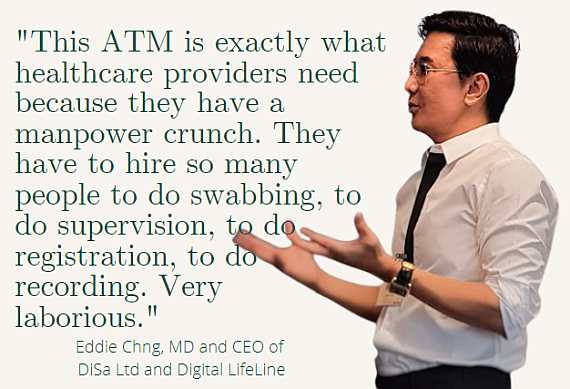 Being large providers of ART test kits, Raffles Medical Group and Fullerton Health decided to trial the ATMs for a month.

Eddie sees such medical groups being key to the proliferation of the ATMs, since the medical groups are the ones appointed to oversee tests at border crossings, major events, ports, cruise centres, etc.

Such medical groups could also deploy the ATMs in their overseas markets.

In his business vision, Eddie sees medical groups purchasing the ATMs (at "below $10,000 a unit" -- a price equivalent to, say, the monthly salaries of two healthcare assistants): "This is to become a permanent tool for them to augment their services, just like they would buy a hospital bed or wheelchair instead of leasing them."

The medical groups will also be motivated to buy test kits (be it saliva-based or otherwise) from Digital Life Line.

He indicates that the pricing will be below what ART kits in the market sell for.

We have 703 guests and no members online