- According to the China Passenger Car Association (CPCA), retail sales totalled 1.78m vehicles in Jun, a 4.6% rise from a year ago. This bodes well for China Sunsine, which makes chemicals that are used to cure rubber in the production of vehicle tyres.
- According to industry thinktank, ReportLinker, new passenger car sales in China should reach 29.7m by 2020, maintaining an annualised CAGR of 7.1% between 2017 and 2020. 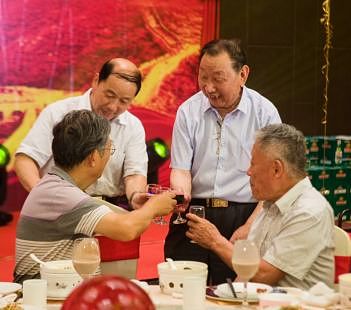 China Sunsine CEO Liu Jing Fu (standing, left) and executive chairman Xu Cheng Qiu (right) celebrate the company's 40th anniversary this month. Photo: Company- China Sunsine currently holds a market leading position both in China and the world with 31% and 18% market shares respectively, as of FY16.
- The group is taking advantage of this growth by expanding its annual capacity by 13% to 172,000 tonnes by the end of FY17.
- Assuming China Sunsine is able to maintain its 10-year earnings growth trend of 12.6% (1Q17: +70%), we could see the stock rerate to $1.10 based on a conservative 10x trailing P/E.
- China Sunsine has been a strong performer in Market Insight's Growth basket, appreciating 15% since inception at $0.70. In view of the continued earnings growth trajectory, we believe that the counter still has some runway for share price appreciation.

We have 638 guests and no members online