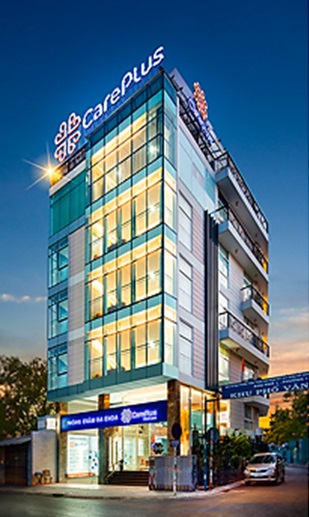 CarePlus Clinic Vietnam is a multi-disciplinary healthcare specialist clinic that spans 7 floors with 15,000 sq ft of service area.
(Picture: Company)"As a significant portion of our foreign medical patients in Singapore come from Vietnam, we will work closely with our Vietnamese partners through a patient referral system to cross-sell our key specialist segments in areas such as oncology, obstetrics & gynaecology and health screening to reap cross-border synergies," said SMG CEO, Dr Beng Teck Liang.

For a healthcare provider with oncology as one of its core fields of specialisation like SMG, Vietnam's healthcare market holds much potential due to its rising consumer spending power coupled with an alarming rate of cancer.

Its GDP expanded by 6.2% for a second year in 2016, defying a regional slowdown. However, the rapidly developing nation is still grappling with trauma from the Vietnam War.

During 1961 to 1971, the US military sprayed a herbicide known as Agent Orange to eliminate forest cover for North Vietnamese and Viet Cong troops, as well as crops that might be used to feed them. About 17.8% of the total forested area of Vietnam was sprayed with Agent Orange during the war, which settled in the soil and sediment and entering the food chain through animals and fish which feed in the contaminated areas.

The toxin is widely believed to contribute to the cancer mortality rate in Vietnam. Among men, it is among the highest in the world, with over 142 cancer deaths per 100,000 people, according to an expert from K Hospital (Hanoi) in April last year.

The Group posted a profit after tax of S$830,000 for 1HFY2016, turning around a loss of S$64,000 in the previous period. The turnaround was brought about by expanding from its LASIK specialist service to diversify into ambulatory care, oncology, ophthalmology, O&G and diagnostic imaging.