(Chiwayland last night issued a circular for an EGM on 7 Nov 2016 to seek shareholders' approval for several initiatvies including a share buyback mandate and expansion of business to new regions. See here) 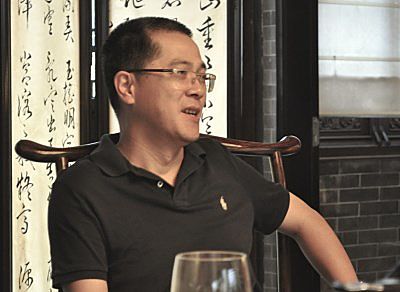 Qian Jianrong, executive chairman and CEO of Chiwayland, during a breakfast meeting with visiting analysts from Singapore.
NextInsight file photo.VALUATION
• RNAV of S$1.55/share and fair value range of S$0.37-0.57. If Chiwayland’s estimates are used, its investment properties could be worth Rmb1.2b while the NPV of its development profits could hit Rmb4.4b. This translates into RNAV of S$1.55/share, meaning Chiwayland is trading at a 89.7% discount to RNAV. Applying a 63-76% discount which China small-cap properties listed in Hong Kong are trading at, Chiwayland’s fair value should be in the range of S$0.37-0.57.

INVESTMENT HIGHLIGHTS
• Rmb4.4b presales revenue locked in, leading to clear earnings visibility. Chiwayland has secured Rmb4.4b in presales development revenue - revenue received but yet to be booked. This excludes Rmb1.2b pending collection (see Appendix). The large presales are due to China’s hot property market where buyers scramble for new development properties. As long as Chiwayland completes its projects, revenue will be booked over the next few years starting 4Q16. This gives clear earnings visibility.

• High gearing allows acceleration of development. We note Chiwayland’s high gearing ratio of 252% but highlight that about Rmb4.7b, or around 90% of its debt, are development debts with the remaining Rmb548.1m being corporate debts.

The heavy interest expense is partly due to higher financing cost for the initial land acquisition stage (8-15%) which only lasts 3-9 months. Subsequently, presales receipts will pay off the high-cost debts while development/construction will be refinanced at lower rates (see Appendix). This leverage (largely from its minority shareholder) allows Chiwayland to accelerate development and capture much of the growing property market (as seen from the pre-sales received). All presales can be collected in advance once the 20% completion is reached and the company can then move on to the next project.

OUR VIEW
• Chiwayland model feasible barring major slowdown. The Chiwayland model largely works on leverage and the rapid development of properties to capture profits. If property prices in China continue to move up, this is an extremely feasible strategy. However, a major slowdown or a turn in property prices could throw a huge spanner in the works. We note the new round of cooling measures announced by the Chinese government during the National Day holidays. Also, Chiwayland may be a little over optimistic regarding its pricing in Australia as BIS Shrapnel points to a flat market going forward.

Projected RNAV valuation could be as high as S$1.55. According to Chiwayland’s estimates of selling prices of future property projects and cap rates in valuing its investment properties, its investment properties could be worth Rmb1.7b while the NPV of its development profits could hit Rmb4.4b. This translates into RNAV of S$1.55/share. Applying a 63-76% discount which China small-cap properties listed in Hong Kong and included in UOB Kay Hian’s coverage are trading at, Chiwayland’s fair value should be in the range of S$0.37-0.57.

Click on video (2 mins 45 seconds) of our recent visit to Chiwayland.

We have 2015 guests and no members online