REX International's market cap is S$101 million currently (based on stock price of 8 cents). It has fallen sharply from about S$400 million about 12 months ago along with the fall in the price of oil.

The market could have re-rated REX a lot more recently but failed to recognise fully the significance of an oil discovery in Norway that REX participated in.

REX has an effective 29.6% working interest in PL338C, south of the Edvard Grieg oilfield in the central North Sea sector of the Norwegian Continental Shelf.

Another company, Lundin Petroleum, whose subsidiary did the drilling there, has a 50% working interest.

After the oil discovery was announced, Lundin's market cap on the stock exchange in Stockholm jumped the equivalent of S$302.7 million in one day (23 Dec 2015).

It's probably not difficult to explain the disparity in stock performance: Investors in Stockholm (or Europe, for that matter) are a lot more familiar than Singapore investors with valuations of oil exploration businesses. 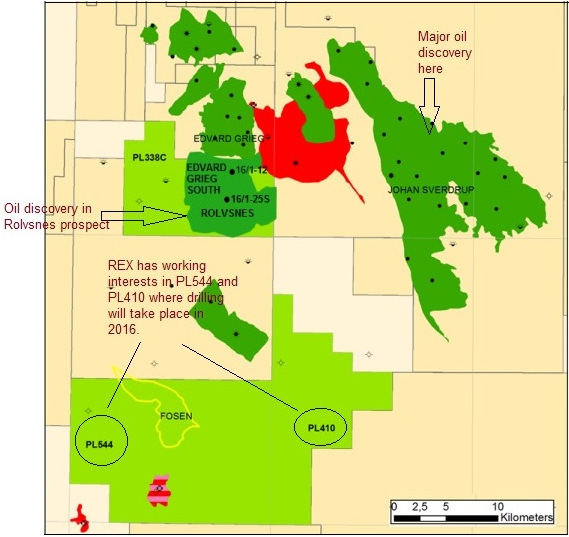 REX uses its proprietary liquid hydrocarbon indicator Rex Virtual Drilling (RVD) to pin-point the location of hydrocarbons so that the exploration risk of its portfolio of assets can be substantially lowered.

In the 5 wells that Rex participated in Norway in 2015, the RVD was accurate in 4, while one well was not drilled to the target depth.

RVD is said to have a success rate of more than 50% compared to 10-15% for conventional techniques.

The company's goal is to sell its interest in oil discoveries, and not to participate in production which is capital-intensive and to which REX cannot add value.

So when might REX monetise its interest in PL338C?

REX's chairman Mr Brostrom said that would have to wait at least until possibly after another well is drilled there this year to establish if there is a lot more oil and if the wells are interconnected with each other.

REX has proved itself in another part of the world -- at Block 50, Oman, where oil has not been discovered for about 30 years until REX did so with the aid of Rex Virtual Drilling.

REX, in due course, will monetise this asset, which covers a sprawling 17,000 sq m and is likely to be far more valuable than PL338C.

Norway is the focus of future work for REX through its 98.77%-owned Lime Petroleum Norway.

Mr Brostrom explains: "There, we have liaised with established players such as Lundin and Statoil, who realise we have some interesting technologies that reduce their risk in drilling. We are going with them into areas that are oil-prolific and where discoveries have been made and these players have been involved.

"These are logistically built-up areas, and there's enough work there to keep us busy for some time."

The Norwegian government has attracted oil exploration interest through its tax incentives, which benefit Lime Petroleum Norway, as a pre-qualified oil company in Norway. It receives cash tax refunds of 78% of its exploration costs annually (regardless of whether it discovers oil or not).

Lime Petroleum Norway holds stakes in 19 exploration licences in the Norwegian Continental Shelf and has applied for more in an annual exercise (APA Round) whose results will be announced later this month (Jan).

Asked about the capex requirements of REX for 2016, Mr Brostrom said: "We have it all funded for 2016. And the Board's position is we have to be very prudent with the cash we have."

We have 1137 guests and no members online