ROXY-PACIFIC: Another property acquisition in Australia!

JUST DAYS after sealing an acquisition in Sydney, Singapore-listed Roxy-Pacific Holdings has now made land purchases in the city fringe.

The land was had for a total consideration of AUD67,380,000 (excluding goods and services tax). 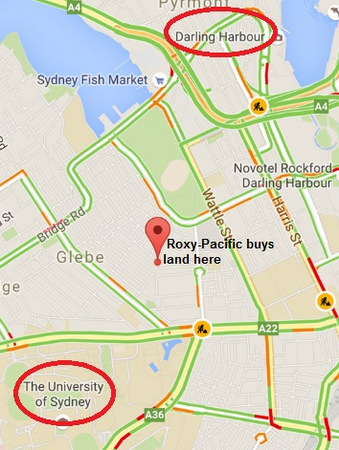 The two city fringe sites have an aggregate land area of 7,125 square metres, or nearly the size of a football field.

The location is a key attraction.

Roxy-Pacific executive chairman Teo Hong Lim told Business Times: "We like the location as it is within one km from the University of Sydney, Haymarket and the Central Railway Station."

According to a Daily Telegraph report, the site is located in "a sought after section of Glebe 500m from Broadway Shopping Centre and 3km from the CBD."

The article added that the two lots were part of a larger government housing estate built in the 1950s and 1960s that was knocked down in 2011 to make way for new housing. Roxy-Pacific will build up to 248 apartments on vacant land it bought on Cowper Street and Elger Street. Photo: Daily Telegraph.
Roxy-Pacific said the land has a development potential of 248 apartments, subject to final regulatory approval.

Mr Koh said the property development is expected to be launched for sale in early 2017.

The acquisition will be financed by internal funds and bank borrowings.

The table below shows Roxy-Pacific's fast-expanding acquistions Down Under. They were made in just the past two years.

We have 698 guests and 2 members online