Nasi Lemak Portfolio: Spicy and nice with 21.5% gain in 3 months

To recap, six investors, after a hearty meal of nasi lemak and mee rebus somewhere in MacPherson, responded to a spontaneous question by one of them: "What is your best stock idea(s) currently?"

Thus the Nasi Lemak Portfolio came into being. Now, let's see how the stocks have done: 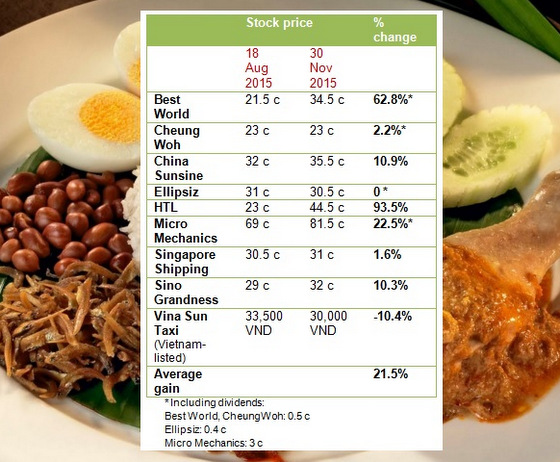 The portfolio earned an average of 21.5% -- wow! -- beating by a mile the STI which suffered a 6% loss over the same period. The portfolio outdid the STI by 27.5 percentage points!

The spiciest performer was HTL International, which the picker had persuaded us had been grossly undervalued for too long.

HTL share price has rocketed on news that a Chinese listco is interested in making a general offer for the company. Chart: FT.com
It took a Chinese listed company to signal that HTL was indeed worth a lot more than its market price then.

In late October, HTL said its controlling shareholder had entered into a MOU with Guangdong Yihua Timber Industry Co. "which may be assets/shares related, aimed at realising value for all shareholders" of HTL.

That's vague. But the stock price shot up from 22 cents to 47.5 cents the next day. It recently traded just below that level. There was an announcement on Nov 18 that the Chinese company "may possibly acquire all the shares" of HTL. DR's Secret skincare range is among the best-selling in Best World's stable of products. Photo: CompanyAnother solid gainer in the Nasi Lemak Portfolio was Best World International, which has risen 62.8%.

Its solid 3Q profit ($4 million, up 259% y-o-y) was probably the catalyst for the run-up on rising volume. There is also an anticipation that the company is close to being granted a direct-selling licence in China. The company had applied for this some time back.

The other stocks in the portfolio (except two) have chalked up varying gains but their turn to win the market's fuller recognition could come, sooner or later.

Of course, it's not a sure thing, so do your own research and be mindful of risk management.

Most assuredly, some, if not all, of the Nasi Lemak Portfolio stocks weigh heavily in the respective stock pickers' real-life portfolios.

Stay tuned for the next update on the portfolio performance at the end of Feb 2016.

(Meantime, one of our stock pickers is taking Vinasun Taxi off because Uber has entered Vietnam and posed stiff competition to traditional taxi businesses there. And, an additional stock picker is giving the portfolio new members -- Valuetronics @ 41 cents and Innovalues @ 74 cents).

Note: The above portfolio reflects the diverse investment interests and perspectives of 7 investors and are not a recommendation for investment by any reader. Your risk profile and investment objectives could differ, and are likely to differ.

We have 752 guests and one member online