ROXY-PACIFIC HOLDINGS, an established property and hospitality group with an Asia-Pacific focus, announced a 52% growth in revenue for the nine months ended September 30, 2015 (“9M2015”), to S$379.6 million from a year ago.

As at Sept 30, 2015, the Group’s balance sheet remained healthy with cash and cash equivalents amounting to S$304.2 million and a net debt-to-ANAV ratio of 0.5.

Segmental Performance Roxy-Pacific’s Property Development segment revenue that constituted 89% and 83% of the Group’s turnover in 9M2015 and 3Q2015, respectively, was lifted 61% in 9M2015 and 40% in 3Q2015. This was mainly due to revenue recognition especially from the completion of a commercial project, Centropod@Changi.

Based on the units sold from its ongoing development projects, the Group has a total of S$412.0 million of revenue to be progressively recognised from 4Q2015 to FY2018.

Roxy-Pacific recently announced its acquisition of a freehold residential site in Singapore at Sea Avenue for S$21.5 million. It was its first Singapore landbank purchase since 2013. 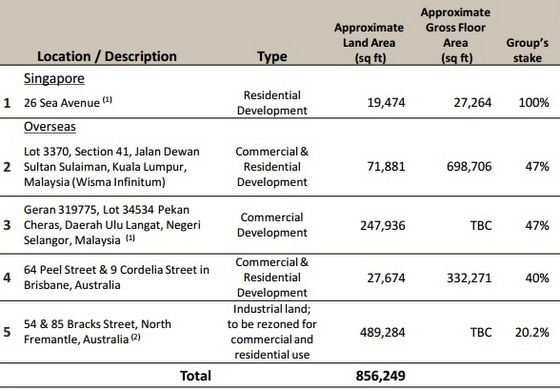 1) Pending completion of acquisition to take place during the year.
(2) The properties are currently zoned as “Industrial” by the relevant Australian authorities. Upon the completion of the rezoning for commercial and residential use of the Bracks Street Property, a decision will be made by the joint venture on the use of the property.

The Property Investment segment revenue that contributed 2% of the Group’s turnover in 9M2015 and 4% in 3Q2015 was boosted 167% and 21%, respectively, mostly due to office rental income earned from the Goulburn Street office building in Australia.

We have 890 guests and no members online