BP presently has three key businesses with core engineering expertise in the design-and-build and development of build-to-suit projects comprising industrial facilities, industrial parks and business parks for MNCs and local enterprises. The 14 wholly-owned industrial properties that BP will retain are currently valued in its books at S$162.5mln as at end-Sept 2014, where 13 are in Singapore with the remaining one located in Wuxi, Jiangsu, China. According to the latest independent valuation, these assets have an estimated aggregate market valuation of approximately S$367.5 mln.
In addition, BP part-owns four joint investments worth S$21.6mln, based on their costs. These will be adjusted upwards to their market valuation of S$53mln pending the spin off. BP had reported FY14 revenue and net profi t at S$209.2mln and S$35.8mln respectively while its NAV was S$164.9mln. For 1H15, revenue and net profit stood at S$107.3mln and S$14.2mln respectively.
We understand that there are also plans for BP to form an industrial REIT, although no specifics were given. Boustead added that the number of BP distribution shares entitled to shareholders has not yet been determined but assured shareholders they will not be required to pay for the shares received through the proposed distribution. Assuming this demerger was completed in FY14, Boustead’s NAV would decrease to S$0.541 from S$0.684 while EPS would decline to S$0.104 from S$0.139.
One of the rationales for the proposed demerger is to unlock shareholders’ value so that the market can better appraise the underlying business and even trades at a higher valuation by reducing any possible conglomerate discount. However, we think this could be a double-edged sword as investors generally like Boustead due to the diversified nature of its three different segments and hence, countercyclical that helps to buffer each other in terms of earnings volatility. 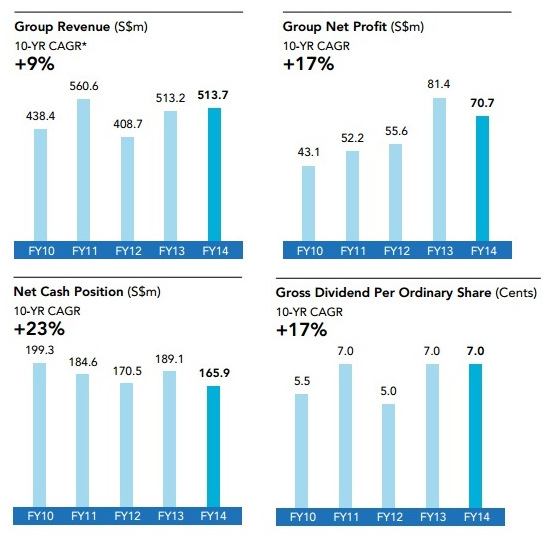 We have 1068 guests and one member online