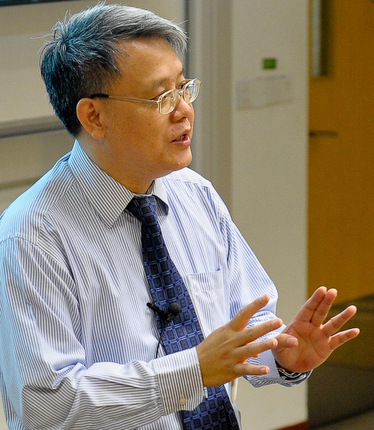 Dr Paul Yip, who teaches economics at NTU, previously worked for the Hong Kong Monetary Authority, the Bank of China and the Bank of East Asia.
Photo: http://www.ess.org.sg/ Thanks to the two posts above which appeared in the NextInsight forum, we stumbled upon an interesting story.

We Googled "Yip Sau Leung", sent out an email and the good professor confirmed that indeed he had become a substantial shareholder of KSH Holdings.

Prior to joining NTU in 1999, he gained extensive central bank and financial experience with the Hong Kong Monetary Authority, the Bank of China and the Bank of East Asia.

Asked why he thought the shares were attractive, he told NextInsight: "According to market fundamentals such as PE ratio, dividend yield, and the discount between net asset value and share price, the share is substantially undervalued."

He shared his observations regarding the market forces at play: "During my accumulation of the shares, I could feel that there is one big shorter with a few trading accounts (including CIMB) and one big genuine seller in this counter, which should be the main reason for the undervaluation. Market gossip also suggests that the big genuine seller is close to selling most of his shares, and the big shorter would be in trouble by then.

"Other than me, I could also feel that there is another big buyer in the market. Of course, the 'close to selling most' for the big genuine seller would still be a large amount for small investors, albeit not the case for large investors.

"Whatever, patience is most important, as time is on our side. That is, the company result would continue to be good and we will continue to receive good dividends. 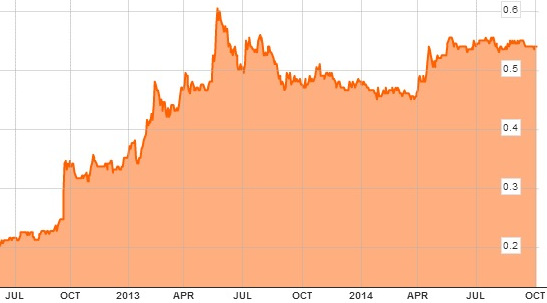 KSH (54 cents) trades at a trailing PE of 5.2 X and dividend yield of 5.56%. Its RNAV is estimated to be above $1 by some investors. Chart: Bloomberg
"On the other hand, the shorter has to pay the borrowing cost and the dividend, not to mention that the global market would continue to rise with fluctuations at least in the next few months. In fact, I could feel the big shorter is stuck at the current price level: He already has a heavy paper loss. If he leaves now, it would be a big realized loss.

"The share price will fly up when he covers his short position, as not many shareholders are selling their shares. That is why he is still trying to push the share price down with the hope to create selling panic. However, he has chosen the wrong counter, as most investors in this counter (including the NextInsight forum discussants, the other big buyer and I) are value investors who would only buy more shares when the share price goes down.

He cautioned though: "Of course, the above comments are only based on my judgment during trading, and is not 100% proven correct. However, I do believe it is a good strategy to buy a bit more at the current price and be ready to buy even more in case there is a lower price."

In addition, OCBC earlier estimated that KSH's GaoBeiDian projects could bag it another $195m net profit (30-35ct of EPS/NAV). However, this was before Oxley was roped in, which could dilute KSH's share.

KSH also has ventured into Malaysia, but for now, I am not accounting for all these overseas ventures in my figures.
Quote
0 #4 kaiwen 2014-10-07 23:38
From the disclosure on SGX website, the short dollars for this counter is almost zero, why Professor Yip said that there were big shorters? Anybody can enlighten me? Thanks
Quote
0 #3 Wiki 2014-10-07 10:50
Was at KSH's AGM this year, made an interesting observation that KSH's chairman stood up after the AGM ended and walked straight to Professor Yip to shake his hands. They also chatted cordially for a long while with the Chairman showing his appreciation of Professor Yip's interest in the stock.

It also seems like KSH is the main party leading the consortium for the GaoBeiDian project with Oxley, Heeton and Tee riding on KSH's connection.

The Chairman seems to think that the GaoBeiDian project will be profitable, with its land prize already above their cost and likely to rise further.
Quote
0 #2 scary 2014-10-06 18:13
whoever dare to short in such big amount got to have insider information.
Quote
+1 #1 bang_pv 2014-10-06 18:00
I happened to have a chance talking with Dr. Yip at length post the last AGM, and got inspired by his deep knowledge of the counter as well as full commitment into it as a long term shareholder. Since then, I have accumulated more KSH shares and continue to look to buy more on any dip. I could sense that there were big buyers out there every time the counter was pushed down, which makes me even more confident to buy more.
Quote
Refresh comments list
NextInsight.net

We have 951 guests and no members online