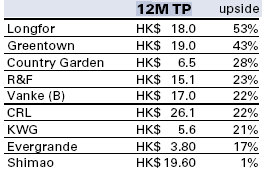 “As of the beginning of December, 19 of 26 cities with data available on a median level saw (near term) volumes increase, with a group median of +20% y-o-y.

“In terms of average selling prices (ASPs), 23 out of 27 cities saw prices increase YTD, with a group median of +7% y-o-y,” Goldman Sachs said.

On the other side of the recommendation spectrum, the research house has “Sell” calls on Yanlord, PCRT and Risesun.

“How big is the rate hike fear? We understand the market’s bearish view on property prices is mainly based on falling rents and yield expansion, along with the (expected) interest rate hike.

“However, we believe the market might have overestimated the impact of rate hike,” Bocom said.

The research house compared the four major rate hikes over the past 20 years, and only half of them led to major corrections in property prices, and those were surprise hikes that coincided with the Mexican/Asian financial crises.

Henderson recently 44.15 hkdIn fact, during the latest rate hike in the second half of 2011, property prices sharply rebounded after an initial 5% decline.

“And as we discussed previously, we believe the market has underestimated the growing housing demand, backed by household formation and delayed completion.”

Bocom expects property rents to remain on an uptrend, unless there is a slowdown in HK/China economic growth as household formation is also a function of economic activity.

We have 1371 guests and one member online