BYD was the most searched mass-market auto play on Baidu last quarter.
Photo: CompanyBACK IN THE DAY, market researchers would go vendor to vendor – and shopper to shopper – to verbally tally which brand had the highest name recognition.

Now, the Digital Age saves us a lot of pavement pounding.

Merrill Lynch said it used China’s top search engine Baidu – which commands an 80% domestic market share – to determine which consumer product names in the China market were the hottest in terms of search hit rates in the first quarter of the year.

“While we cannot say that Internet search frequency guarantees or even accurately reflects brand strength or profitability, we think it does offer valuable insight into consumer interest and brand mind share, and may be a leading indicator of future market-share moves,” Merrill Lynch said. 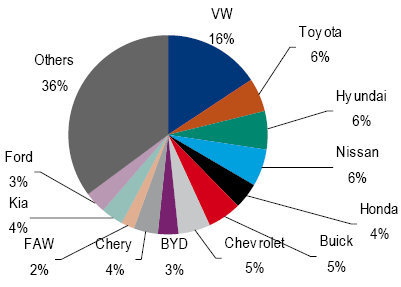 E-commerce, Yum China, beverages and luxury stand out as the highlights for 1Q13, Merrill Lynch said.

Taobao significantly widened its lead against 360buy and other e-commerce competitors.

KFC (Yum China)’s search hits continued to drop for two quarters in a row, possibly as a result of the chicken supply issue.

Reshuffling in luxury also continued with strong momentum of Coach (HK: 6388) and Prada (HK: 1913), and a further slip for Gucci.

The gap between #1 and #2 was mixed across categories. 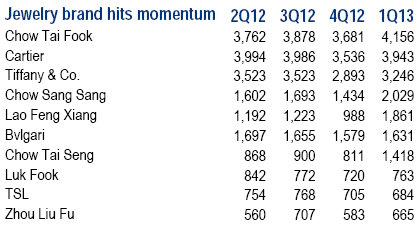 In casual wear, Uniqlo’s (fast retailing) lead over No.2 Zara also narrowed QoQ, possibly as a result of the abnormally high base in 4Q12.

And in sportswear, Nike’s lead over Adidas widened in 1Q13, partly due to the popularity of its official website.

In the beverage space, drinks and instant noodle giant Tingyi lost #1 to domestic herbal drinks (Jiaduobao and Wanglaoji), with search hits down 53% YoY and 56% QoQ.

“Interestingly, it might not be necessarily a negative to Tingyi, as the 4Q12 search queries for Tingyi were dominated by the alleged relationship between Tingyi and Japan, which faded away in 1Q13,” Merrill Lynch said.

The strength of the latter two might be related to the continued legal cases and high profile A&P campaigns. 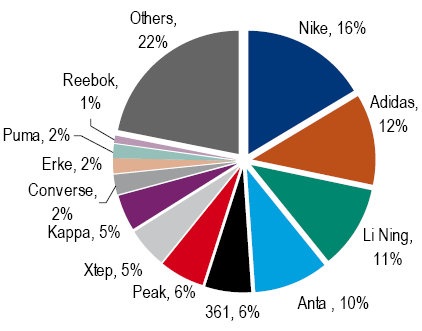 Xtep's recent market in China stood at 5%, but it's hit rate on Baidu was No.3 among domestic brands.    Source: Merrill Lynch

“Meanwhile, for the first time since our series launch (in 4Q10), Coke’s ranking dropped out of Top 5, and its position was taken by another domestic player Wahaha, given its aggressive new product launch and sponsorship of a popular TV show.”

Among instant noodle brands available in China, Tingyi and Uni-President China (HK: 220) swapped positions with the former regaining #3, but the gap between the two was negligible, while Tsingtao (HK: 168; SHA: 600600) stayed “King of Beers” in China, maintaining its #1, with Snow (CRE) recovering to #4, after a sudden dip to #6 in 4Q12.

Meanwhile, Prada moved 2 spots up to #4.

With no change in ranking, the sector’s hits in 1Q13 continued the declining trend in 4Q12.

Chow Sang Sang on the move

By doing so, the Hong Kong-based jeweler is now rubbing shoulders with foreign heavyweights Cartier (#2) and Tiffany & Co (#3).

Meanwhile, in the mass market auto sector, Ford moved up from #7 to #3 in the 1Q13, given the wide interest in its “Maverick” SUV.

But Shenzhen-based hybrid automaker BYD Co (HK: 1211; SZA: 002594) was the big story, maintaining its top spot for the fourth consecutive quarter in the mass auto market as far as Baidu search tallies are concerned.

We have 329 guests and 2 members online