CLSA said there is a “shifting tide” for the better for China’s dry bulk shipping sector and it is initiating coverage with an “Overweight” recommendation (see below for related news on SGX-listed dry bulk firms).

“While recovery this year will be gradual, we expect rising rates to improve earnings momentum and drive a rerating in the stocks.”

CLSA is starting China Shipping Development (HK: 1138) with a “Buy” call given its direct leverage to China’s economy through deliveries of dry bulks and oil to Chinese steel mills, IPPs and oil majors.

CLSA anticipates demand to increase with growth in China and Asean, with tonne-mile demand to enjoy a 7.5% CAGR over 13-14CL compared with 5.3% in 2012.

“Our forecast is based on seaborne dry bulk demand improving as China’s economy bottoms and grows at greater than 8% GDP in 2013.

“We anticipate the industry will improve incrementally as supply (vessels) is removed from the market through scrapping, especially as leveraged owners unable to meet cash costs go bust.” 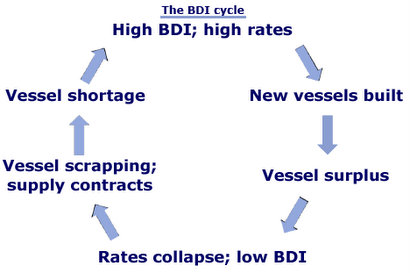 The note to investors added that the market likely bottomed last year, and investors should look to buy now as earnings momentum and margins improve through 2013 and 2014 driving a re-rating in the equities.

“As vessel supply declines, we anticipate the supply demand outlook to stabilize and improve over 13-14CL with tonne-mile supply and demand growing at roughly the same rate in 2013 and demand growth significantly exceeding supply growth over 2014, pushing the market back towards balance.”

Dry bulk demand is largely driven by Chinese demand for bulks, with China accounting for nearly two-thirds of iron ore demand and almost one-fifth of the market coal and grain markets.

“As the market moves back into balance, we believe the equities will deserve to rerate as earnings and margins improve.”

The upbeat CLSA report (above) comes not a moment too soon for the region’s dry bulk shipping industry, and is especially good news for three Singapore-listed plays with heavy exposure to the industry and strong reliance on the well-being of Mainland China’s overall economy: Yangzijiang, JES and Courage Marine.

Yangzijiang Shipbuilding’s proposal on Jan 16 to issue 330 million warrants at a price of 0.3072 yuan (0.0605 sgd) apiece looks rather prescient in retrospect now that CLSA has just published its upbeat report on China’s dry bulk shipping sector. 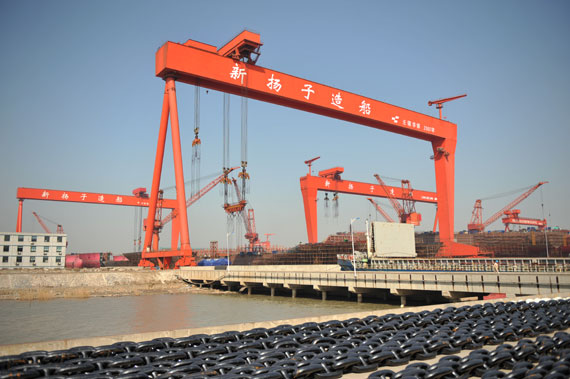 YZJ's New Yangzi shipyard is one of its 5 yards with a combined production area of 937 hectares
Photo: Yangzijiang

If CLSA is accurate in its forecast (top of page) that seaborne dry bulk demand will improve as China’s economy grows at greater than 8% GDP in 2013, then YZJ’s recent fund-raising move will certainly pay off down the road on expected order growth for bulk vessels to carry all that iron ore, coal and other bulk commodities needed to keep the hungry Chinese economic juggernaut well fed.

“According to management, this proposed warrant issue is for YZJ to prepare funds for the future when the shipbuilding industry recovers,” OCBC recently said.

The recent NextInsight story giving OCBC’s take on the warrant proposal said that although the move is a fundraising exercise, the amount that YZJ will receive for now is relatively insignificant to the amount that may potentially come in later when the warrants are exercised. 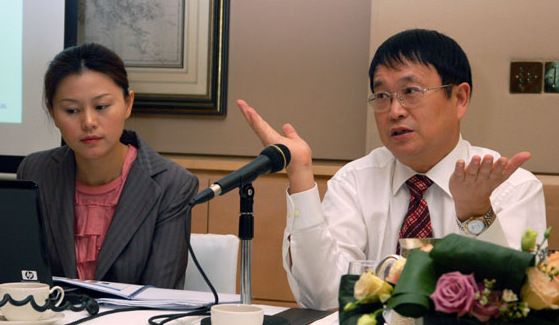 With a net cash and financial assets position of 9.95 billion yuan, YZJ is in no need of cash for the near term.

YZJ management contends that this is long-term planning as the potential funds would provide additional financial flexibility for future market expansion and development opportunities.

The OCBC report earlier this month maintained its “Hold” recommendation on YZJ with a fair value estimate of 0.95 sgd (recent share price 1.01).

Yangzijiang also released a statement on its website on January 22 providing insights into its business strategy going forward.

Management said it was fully confident that YZJ would realize its growth aspirations in 2013.

“We realize many were dispirited about the shipbuilding sector’s performance in 2012. But 2013 is a new year and a new start, and we are ready to move forward with confidence.”

Calling 2012 a “black year,” YJZ management said it was ready to both move on and move forward with greater determination.

It said market-based adjustments in production plans are in place.

JES International Hldgs Ltd has also been in the news of late as it continues to carry out a diversification campaign for its vessel types to help spread risk across a larger range of sectors.

Therefore, if CLSA’s expectations of a stronger dry bulk shipping sector come to fruition this year, it will likely have a positive impact on orders for JES vessels servicing the sector down the road.

Listed on the SGX Mainboard since 2007, JES is a major PRC shipbuilding group which has built bulk carriers, oil tankers, containerships and ocean engineering vessels.

This is the Group’s second contract inked following an expansion of its traditional shipbuilding operations into the offshore oil&gas sector with its initial order for a PSV announced on October 8, 2012.

This second contract was won from the same Norway-based client, and is also slated for end-2014 delivery.

Thanks to this latest order, JES now has two PSVs gracing its order book for offshore support vessels.

“We are building up decent momentum in our expansion into the offshore space. The repeat order, along with two additional units to be effective in the coming months, represents our customers’ confidence in our capability to build offshore support vessels of global standards.

“This is an encouraging start to our move into the offshore space, and we shall endeavor to secure more contracts to build a strong presence for ourselves in the offshore space,” said Mr. Jin Xin, JES Chairman and CEO, at the time of the signing.

Among Singapore-listed dry bulk carrier-related plays, Courage Marine Group is likely to be the biggest and earliest overall winner from a possible stronger bulk cargo shipping sector this year as it is a pure play in the industry.

Also, as a dedicated operator (not builder) of dry bulk carriers, it isn’t subject to the one-year lag time that OCBC said in a recent report is usually required waiting time for shipbuilders to see the upside from an improved bulk cargo sector.

We have 866 guests and no members online