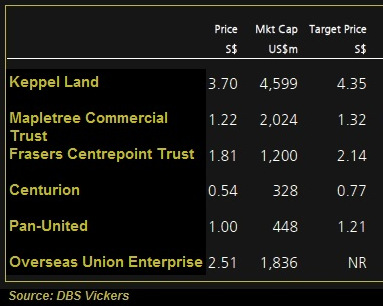 Whilst most developers are likely to be beneficiaries in the long run, those with existing exposure to the growth locations could have a first mover advantage.

There is unlikely to be any immediate term benefit to companies in the construction sector for the next two years as we believe actual construction development will take place after 2016/17.

Centurion's workers' dormitory in Tuas is one of the largest in Singapore with 8,600 beds. It is equipped with comprehensive facilities and furnishing and fittings that set it apart from other dormitories. Residents enjoy wi-fi internet access and prepare meals in hygienic kitchen facilities. Photo: Company

Another company that we could potentially benefit from the master plan is Centurion Corp (CENT SP, TP S$0.77), which owns and operates foreign worker dormitories in Singapore.
The stream of development projects announced will ensure that the demand for foreign workers will still be strong in the medium term, notwithstanding productivity improvements that are ongoing in the construction sector. 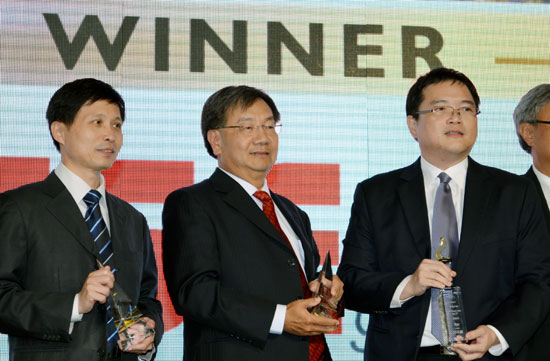 Centurion CEO Kong Chee Min (extreme left) received an award on behalf of his company at the recent SIAS Investors' Choice event honouring companies with good corporate governance and transparency practices. Also in the picture: NeraTel CEO Samuel Ang, CSE Global Interim Group MD Lim Boon Kheng.
NextInsight file photoCenturion is uniquely poised to benefit from the construction boom in the long term as the majority of its dormitories (c.19k of c.28k beds) are on land leases of thirty years or longer, in contrast to temporary dormitories whose leases run a maximum of nine years.

The Group's permanent dormitories are in Mandai, Toh Guan and Woodlands, all of which are located close to development projects identified in the Master Plan.

We like Centurion for its growth profile - its total bed count is expected to rise from c34k today to 55k by 2015, in both Malaysia and Singapore.
We currently have a buy call on this stock, with a DCF-based target price of S$0.77.

We have 1661 guests and no members online