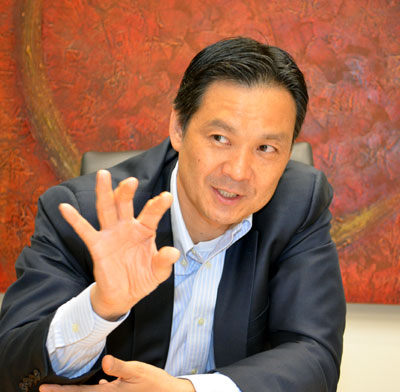 "We are at the cusp of commercialization of the Nano-Emulsion Fuel System for use in diesel engines." said CEO Lawrence Komo. Photo by Sim Kih

TRANSCU IS acquiring a commercialization-ready nano-emulsion fuel system through a deal which involves cash injection that improves its financial position.

(1) Transcu will acquire 74.8% in Nanomizer Pte Ltd, which owns a technology incubator (NANOMIZER Inc) for pulverization and emulsification technology and patents.

Forest Pine Group and Forest Pine Holdings have a total share ownership of 74.8% of Nanomizer Pte Ltd. This will be transferred to Transcu for a consideration of S$41 million worth of Transcu shares, which is a 60.1% discount to an independent valuation on Nanomizer.

(2) Forest Pine Group will inject cash of S$4 million up to S$12.2 million into Transcu as placement consideration for 461.5 million to 1.2 billion new Transcu shares.

(3) A minimum of S$2 million with an option of up to S$3 million of outstanding shareholders loan payable by Transcu to Forest Pine Group will be converted into shares, thereby reducing the debt level of Transcu.

(4) Mr Matsumura and the Forest Pine Group will collectively hold 54.8% and up to 58.9% in Transcu, depending on the total cash injection and loans converted, compared to Mr Matsumura’s current interest of 8.2%.

This acquisition improves Transcu’s financial position, and that will be helpful when applying for bank lines as well as other forms of fund raising, according to the CEO.

”Some of the applications for Nanomizer’s NEFS include land and marine generators which are at pre-order testing at the sites of prospective customers,” said CEO Lawrence Komo during an exclusive interview with NextInsight recently.

Even with the minimum subscription of 461.5 million shares by Forest Pine Group, Transcu’s balance sheet significantly improves as follows:

In January, Transcu cut down its rental costs by relocating from its Singapore Land Tower office in Raffles Place to The Actuary in Toa Payoh.

With the cash injection, it expects to take the commercialization of NANOMIZER’s technology to fruition, pay existing suppliers, as well as invest in capital expenditure and inventory.

Purchase consideration for Nanomizer was based on 1.3 Singapore cents per Transcu share, which is near its lowest transacted price since the stock's trading suspension was lifted in Oct 2012. Bloomberg data

We have 844 guests and no members online