• Proven track record since 1969. HLS was involved in many sizeable public projects such as the Punggol, Seng Kang and Buangkok MRT stations of the Northeast Line, Kim Chuan MRT and Changi Airport Terminal 3. The company also has been providing building materials for the Housing & Development Board since 2006. 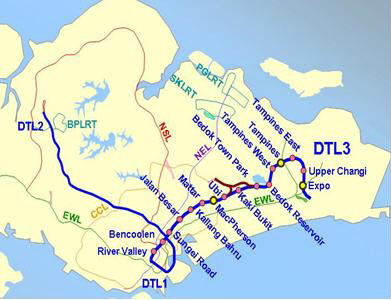 Downtown Line 3 will start at the Expo Station and end with River Valley Station. Map: LTA
• Orderbook to last them till 2015. HLS is reported to have an orderbook of S$464.5m for projects lasting through 2015. It currently has three large civil engineering works on hand – the Marina Bay MRT station worth S$348.4m, completing in 2011, Marina Coastal Expressway, worth S$305m and completing in 2013 and the Jalan Gali Batu depot for the Downtown line worth S$410m until 2015. Management estimates that 70-80% of the contract will be booked within first three years of project commencement.

• Positive sector outlook presents opportunities The Singapore government is going to invest S$60b in the rail network over the next 10 years and double the existing MRT network from 138km to 278km by 2020. The next potential tender is Downtown line 3 (DTL 3) consisting of 16 stations with three interchange stations. There are 18 packages/contracts to be tendered under DTL 3, each valued at about S$200m-300m.

Based on the past record of DTL 2, HLS has already pre-qualified for some packages. Other rail constructions include the 27km Thomson Line, 21 km Eastern Region Line and the 14km East-West extension line.

• Strong financials to take on any project size As of 30 Jun 10, the company is sitting on S$150m cash (S$0.29 per share) with zero debt on the balance sheet. Other liabilities include advanced payment received from customer and provisions for costs overrun under progress billings in excess of work-in progress.

• Currently, HLS is working on a few DTL 3 project tenders which will be closed by end of the year. Given that HLS is one of the few local contractors with a track record in large-scale MRT projects, we expect HLS to win at least one contract from LTA.

• We recommend a BUY and a target price of S$0.375, based on the sector average PE of 8.70x 2010F core earnings. The company also has a policy of paying approximately 30% of the net earnings as dividends which we project at 1.5 S cents for FY10 or 4.9% yield on the closing price. We think that as the company is backed by S$0.29 net cash per share, the downside of the share price is limited.

• Contracts for MRT projects are larger in value which will cause orderbook to be bumpy. Such projects are also dependent on government initiatives. 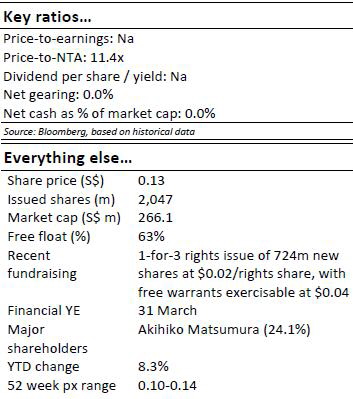 Source: Kim Eng Research, Nov 1
Background: Transcu is a biomedical company engaged in the pharmaceutical and cosmetics businesses. The key element in its biomedical business is the Transdermal Drug System, a painfree, non‐invasive drug delivery system (skin patch) that is in the final stage of clinical trials. The company was listed on the SGX in 2009 through a $675m reverse takeover of Eng Wah Organisation.

Recent development: Loss‐making since 2009, Transcu lacks the working capital to push its pipeline of bio‐medical products. It has turned to distributing Nanomizer Pte Ltd’s cost‐saving fuel, the Nano‐Emulsion Fuel System (NEFS), to bring in cash more quickly. In August, the company announced a non‐renounceable rights issue of 2 cents/share, with free warrants, to raise $8.9m.

Environmental business with big potential. The NEFS combines fuel and water with emulsifying and stabilising additives to create a lower cost and cleaner alternative to conventional fuels. It was developed by Nanomizer Pte Ltd (Nanomizer), a company owned by Transcu’s CEO Akihiko Matusmura and his brother Takehiko, CEO of Nanomizer.

Akihiko Matsumura, CEO, Transcu
Transcu will be distributing NEFS to oil companies in China through a third‐party distributor. It is also looking to install NEFS on 200 ships in Japan once the system is approved by the Japanese authorities, which could bring in US$10‐14m in distribution fees. The management believes in the market potential of NEFS and may look to buying a 10% stake in Nanomizer.

Cash infusion to tide over rough patch. Transcu continues to develop anesthetic skin patches and other pharmaceutical products. As such, before the Transdermal Drug System becomes commercialized, R&D expenditure will continue to strain the Group’s cash flows.

In August, the company announced a nonrenounceable rights issue of 2 cents/share, with free warrants, to raise $8.9m for working capital purposes. If the warrants are exercised at the exercise price of 4 cents/share within two years, the company would be able to raise $36.4m. We estimate that the rights proceeds may tide them over for at most a year based on the latest cash flow statement. For now, Transcu is nothing more than a concept play.

We have 890 guests and no members online