Why Are PRC IPOs Getting Nixed?

Even in a depressed capital market like China’s, firms are still out there wanting to go public.

And even in such a climate, stock market regulators still have to uphold threshold entry barriers.

So far this year, over three dozen IPOs have been shot down.

So who’s going to the prom and could geography have something to do with it?

Ostensibly, the main reason IPO aspirants have been held back at the gates to a public existence this year is all about money. 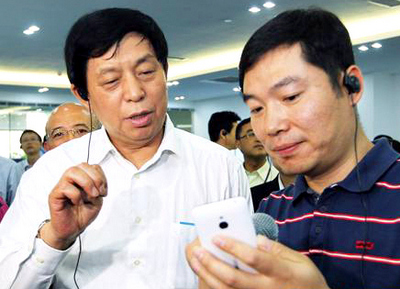 Provincial officials meet with engineers at Guizhou Province-based mobile device software play Longmaster. The firm recently made it through the turnstile and launched a domestic IPO. Is the bourse regulator promoting firms from underdeveloped provinces?
Photo: Longmaster

But could location also be playing a role in the decision making process?

The 37 listco wannabees who had their A-share IPO dreams shattered this year were primarily disinvited to the party for reasons of profitability – or lack thereof is this case.

The main reason for their failure win IPO approvals, as cited by China’s bourse regulator – the China Securities Regulatory Commission (CSRC) – was a concern over these candidates ability to generate, much less sustain, profitability for their prospective shareholders.

First of all, 2012 hasn’t exactly been an ideal time for capital-hungry Chinese firms to launch IPOs.

Not only is liquidity tight amid the protracted bear market, but investor sentiment is abysmally low as the benchmark Shanghai Composite Index continues to hit new lows not seen in well over half a decade.

In this climate, the bourse watchdog would likely be more than happy to lower the bar and let in some new blood to the market.

But it can’t let its guard down to the point where anyone with a lawyer, underwriter and a modicum level of business experience can suddenly start selling shares in Shanghai or Shenzhen.

In addition, when sentiment is low and funds are tight, the last thing that might tempt a buying spree would be an unknown quantity like an SME IPO suddenly breaking onto the scene and vying for already skittish capital.

Finally, the CSRC has basically taken the opportunity of a down market and a slow IPO season to actually raise the barrier to entry for bourse newcomers in order to ensure that the winnowing out process pays dividends post-bear in the form of healthier A-share firms.

Therefore, market entry requirements this year have been different than in years past, resulting in far fewer sky-high P/E ratios for new IPOs making it through the CSRC gauntlet.

What is important for A-share investors is not so much what new guidelines are being applied in approving or rejecting IPO applications.

Rather, what should be monitored is whether the firms allowed in so far are truly deserving of being public enterprises and if they can be viable, competitive forces for progress in China’s capital markets.

Endangered Species?   Zhejiang Shibao (SZA: 002703) dual listed in Shenzhen last month to supplement its Hong Kong shares (HK: 1057). But is this listco from a prosperous province to become an IPO rarity?  Photo: Company

One of the biggest impediments to firms going public this year has been the skyrocketing IPO expenses, mainly due to soaring underwriting and consultation fees by brokerages.

This has kept many IPO aspirants on the sidelines, spending more time in pre-IPO fundraising activities to help fund the underwriting costs themselves.

And although 2012 has yet to breathe its last bearish breaths before giving way to a new calendar year, it is useful to look at the IPO situation for the current year now in order to predict with any accuracy where it might be headed in the next.

There are some geographic oddities including the fact that not a single firm from the three provinces of Guizhou, Xinjiang or Tibet had made it through the IPO wringer last year, but three have made it in 2012.

At last count, A-share aspirants totaled 818, with 155 capital-hungry enterprises eyeing a main board listing in Shanghai and a whopping 753 awaiting approval on the sidelines in Shenzhen – with 315 of these looking to go public on the ChiNext board, often called “China’s Nasdaq.”

A total of 90 firms have essentially made it through the gauntlet alive and kicking, and are merely awaiting the country’s bourse watchdog – the China Securities Regulatory Commission – to give the final green light.

But are there any characteristics in common among the 37 firms whose IPO applications have been rejected outright this year?

With A-shares down sharply, could IPOs breathe new life into the domestic capital markets?

And more importantly, what can others waiting in the IPO line learn from these rejects’ mistakes?

As for the oddity of having three provinces not representing a single IPO candidate to make it to the main waiting list in 2011 yet found a way to slip through some local firms this year, IT play Guizhou Longmaster Information & Technology Co (SZA: 300288) is among them.

In January of this year, Longmaster became just the second firm in the two-decade old Chinese stock market to have to scrap an IPO post formal launch due to an inability to raise bids from the mandated 20 institutions during the book-building process.

The IT firm was offered the option of reattempting the process after six months, which it did -- successfully.

The enormous but economically underdeveloped northwestern Chinese province of Xinjiang also managed to get two of its native sons public this year.

Trends like this clearly suggest that the capital market oversight body is attempting – whether overtly or unintentionally – to help “spread the wealth” and lessen the bourse’s overreliance on the prosperous Yangtze River Delta (YRD) provinces of Jiangsu, Zhejiang and the city of Shanghai itself.

A disproportionately large number of A-share listed firms are either based in, or have major production facilities in, the YRD region.

In 2011, some 157 firms from this booming delta region were approved for IPOs.

However, by last count this number had been reduced by over half during the current year.

For the first 11 months of this year, the top origin for successful IPOs in China has been Guangdong Province (29 firms), Beijing (22), Jiangsu (21), Zhejiang (18) and China’s industrial and financial capital – Shanghai (just 5).

The firm’s newly-listed A-shares debuted at 15.62 yuan, soaring over 505% from their offer price of 2.58, making it the biggest opening day for a PRC-listed firm in a decade.

But given the apparently unstated recent policy of letting firms from less prosperous provinces jump to the head of the IPO line – prosperous, productive firms from China’s wealthy maritime provinces might want to grab a chair as they wait for go-public approval from the CSRC.

In fact, such an implicit tendency by the market regulator should come as no surprise to anyone paying attention to economic regulator pronouncements this past decade touting the benefits of developing the underdeveloped hinterlands.

Its just that when such a policy is applied to markets, which are ostensibly free, that’s when investors’ heads might start turning.

What The Big Boys Are Buying In China

Thank you very much for your inquiry and your continued support of NextInsight.net

(Unfortunately, it's in Chinese only, and here are the highlights of the statement which I translated into English for you if convenient):

Jiaolong Heavy Industries is planning to apply for a listing in the first quarter of 2013, and will strive to launch its IPO within the 2013 calendar year. The company expects its full-year 2012 sales revenue to be between 1.2-1.5 billion yuan, with a profit of around 150 million yuan. It expects its P/E ratio at the time of IPO application to be around 40x. It plans to issue 25% of its registered capital to the general public. Post-listing, the company expects its market value to be six billion yuan. It expects to raise around 1.5 billion yuan in proceeds from the IPO.

You are also correct in that there is no mention of Jiaolong Heavy Industries' IPO status on the CSRC website (http://www.csrc.gov.cn), whether a search is made using the company's English name, or its Chinese name: 蛟龙重工

And unfortunately, there is no information on its IPO status when searching Baidu, Google and Yahoo using either the firm's English or Chinese names.

Furthermore, Jiaolong Heavy's URL is devoid of any mention of the IPO in its "Company News" (新闻中心) section or its "Investor Relations" (投资关系) section, which is empty.

I hope this helps and please don't hesitate to ask for further assistance whenever required.

Andrew Vanburen
NextInsight.net
Quote
0 #1 EC 2012-12-10 08:59
I couldn't find any detailed information related to the list of 800 odd Chinese companies applying for listing in China from the CSRC website.

Would you be able to advise whether Renewable Energy Asia Group's parent company, Jiaolong Heavy Industry, is on the list, and if so, what is the status of its IPO application?
Quote
Refresh comments list
NextInsight.net

We have 626 guests and 2 members online