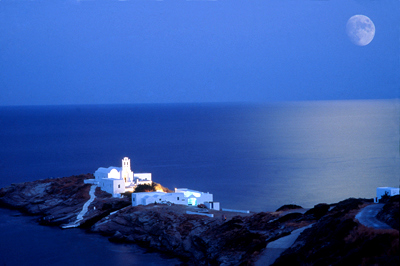 Much of the EU including nearly bankrupt Greece was the recent venue for a major roadshow by Chinese A-shares.  Photo: visitgreece

CHINA'S BEAR-BURDENED bourse is taking its show on the road to pump up interest.

Over 30 offshore funds may boost their A-share investment quotas by over 10 billion usd, a campaign that could result in the pie growing by nearly 50%.

First of all, let’s review a bit of background about China’s qualified foreign institutional investor scheme (QFII), first implemented in 2002.

The decade-old program was designed to permit licensed overseas investors to trade yuan-denominated A-shares in both Shanghai and Shenzhen, the locations of China’s two stock markets.

B-shares have been open to foreign investors all along, but are typically of much poorer quality and return potential.

As of mid-2011, the country’s bourse watchdog – the China Securities & Regulatory Commission (CSRC) – said there were over 100 licensed QFII investors operating in China with an aggregate quota of over 21 billion usd to invest in the country’s capital markets under the QFII program.

However, the foreign parties have recently been not only clamoring for a bigger piece of the PRC pie, but a bigger pie to boot.

Therefore, if the over 30 QFIIs looking to boost the quota by in excess of 10 billion usd are successful in their attempts, the pie available to foreigner institutional investors in China’s A shares would grow by nearly 50%.

On the recently concluded group campaign pushing the merits of A-shares overseas and sponsored by officials from both the Shanghai and Shenzhen stock exchanges, the futures exchange and other high-powered financial sector leaders, the entourage focused on QFIIs and QFII candidates in North America, Europe, Japan and the Middle East.

The bulk of the attention was given to both foreign pension funds and sovereign debt funds with the roadshow taking place at a time when debt crises were wracking the EU and the US was beset by a shaky job market, sputtering economic recovery and a population distracted by a key presidential election next month.

Foreign Aid: A-shares have done poorly this year and are now looking to boost foreign investors

But it wasn’t just instability overseas that made the timing of the massive QFII promotion campaign interesting.

China itself is struggling to get back the high GDP growth rates of just a few years ago and has been the host of the world’s worst-performing benchmark stock exchange index in the world for much of 2012.

On the bright side, inflation growth for September came in slower than expected which might put a charge back into consumer confidence, and sharebuying after all is a buying exercise after all that is highly dependent upon market sentiment.

Investors will recall that the decade-old QFII program was originally created in large part to respond to foreign criticism that Mainland China’s capital markets were unfairly restricted to PRC investors only while markets in Singapore, Hong Kong, New York, London and elsewhere were accessible to anyone with the money and courage to take a chance on a company or two.

Now, in the year 2012 when the benchmark Shanghai Composite lags the world in performance, even as China marks the Year of the Dragon of all animals, it seems like Beijing has come full circle and is now actively courting foreigners to help breathe life back into the PRC’s moribund bourses.

Perhaps the recent embracing of QFIIs isn’t quite an example of misery enjoying company.

But it certainly does say a lot about how even China can eventually come to realize that in many cases, capital has no country, and investment monies know no nationality.

Total foreign investment in China-listed shares currently stands at a paltry 1.97%, with just half of that from QFIIs.

Meanwhile, by comparison foreigners hold 36% of shares listed in South Korea and 22% of companies selling shares in Malaysia.

Therefore, when the gates are truly opened in China, it will be more a flood of interest rather than a trickle.

BEHIND THE SCENES: Top China Funds Faceoff In Beijing

We have 491 guests and no members online