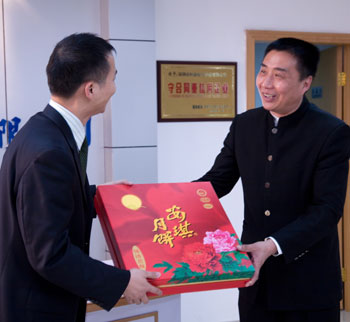 Let the Good Times Roll: A Sinafinance blogger says there's no reason for the market to return to bearishness following the end of this week's market holiday in China.
Photo: China Angel

AS 1.3 BILLION Mainland Chinese celebrate a weeklong Mid-Autumn/National Day combined holiday this week, when markets reopen next week investors might have a post-break bounce to look forward to.

But a healthy curbing of enthusiasm may also be in order.

That being said, investors should not let the holiday cheer and optimism fizzle out as markets reopen on Monday.

This week began with families reuniting to celebrate the arrival of Autumn, perhaps overindulge in mooncakes and catch up on some light-hearted gossip on seldom-seen uncles and cousins.

And of course the National Day break pumped a bit of pride, pomp and parade into the people, with families gathered around television sets around the country for a look at the colorfully choreographed masses marching past the cameras.

As the A-share markets in Shanghai and Shenzhen are shuttered for nine consecutive days, it’s a chance to unwind, decompress and work out the kinks in investor confidence through some good old fashioned R&R.

We saw shares behave in a decidedly bearish fashion in the first part of the most recent trading week, hitting a long-term low of below the key 2,000 level.

But Thursday showed that the market still had a bit of spring in its step, adding the second most value in nearly a month followed by Friday’s pre-holiday buying spree in which the benchmark Shanghai Composite Index jumped another 1.5%.

There is no logical reason why this two-day buying binge should be wiped clean off the slate by the mere interruption of a weeklong holiday.

Much of the recent upbeat sentiment was buoyed by the desire to snatch up perceived bargains in China’s stock markets, the world’s worst performing major bourse in the third quarter and for much of 2012.

It's Official: China's bourse was the world's worst performer in the third quarter

However, a closer look at the upside drivers in the latter half of last week reveals more reality than rumors, more substance than style driving the two-day rally.

This helped round out the week and prove that Thursday was not just a long overdue bargain hunting session, as back-to-back days like these are a rarity, having usually run out of gas when the closing bell sounds on the first day.

This finally put a long-anticipated bright spot on market sentiment, pushing the benchmark index over the 20-day moving average.

Although there is sovereign debt uncertainty overhanging the EU markets, economic stagnation miring the US recovery and major political events on the horizon in both Washington and Beijing, the general consensus is that the world’s biggest economy is holding its own and China’s will likely avoid a hard landing.

Following major stimulus packages from the world’s top three GDPs – Washington, Beijing and Tokyo – it may be true that the initial bounces from these spending campaigns have been priced into regional markets.

But now investors can look forward to picking and choosing among the likely listed benefactors.

So let the good cheer remain as we return to work next week.

DRAWN & QUARTERED: Miserable Q3 For China FundsPARTY OVER? Dual-Listcos Much Better Off In Hong KongFAB FIVE: Which Themes Are Driving China Rally?

We have 587 guests and no members online