WORLD PRECISION CEO: Time Will Tell which are the Good S-chips 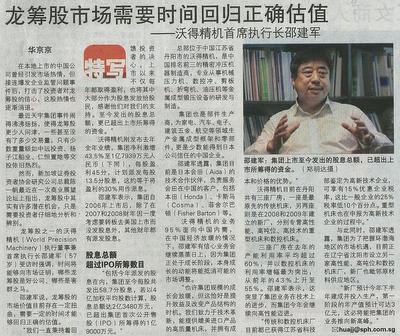 AT ONE TIME, S-chips here in Singapore were the “It” stocks, attracting a lot of excitement.

But following a dizzying string of irregularities and run-ins with the regulator, investor confidence in Chinese shares listed on the Singapore market has fizzled out.

However, there may be light at the end of the tunnel for World Precision Machinery (SP: BWPM) and its S-chip peers.

Speaking recently at an industry exhibition, SIAS Corporate Governance Committee chairman Vincent Chen said there were some hidden gems within the family of S-chips and investors need only put in the time and effort to fish out the potential winners.

World Precision CEO Shao Jianjun emphasized in a recent interview that the passage of time will help weed out the viable S-chips from the rest.

He said that because there are admittedly some distortions in the market at present, it will take some time to determine the true intrinsic worth and fair valuations of some listed firms.

“We have never taken investor confidence for granted and are always trying our best to earn the trust and backing of our shareholders. The fact that we have always been profitable every year since listing and our nearly unbroken streak of offering dividends to our shareholders is proof of this, and we are always more than willing to reward our loyal supporters as such.

“In fact, our dividend payout total to date has already surpassed the total funds we raised at listing,” Mr. Shao said.

The company proposed a dividend of RMB 13.5 cents per share, maintaining its dividend payout ratio at around 30%.

Based on recent share price levels, that translates into a dividend yield of around 4.8%.

Mr. Shao added that since listing in 2006, other than in FY2007 and FY2008 when World Precision was pondering a US listing and didn’t provide dividends, all other financial years rewarded shareholders with dividends.

“If this year’s dividend total is added into the mix, from our listing until today, average dividends stand at RMB58.7 cents per share. Using a weighted average of 400 million Singapore shares, we’ve already paid our shareholders 234.8 mln yuan in dividends, a total which has already surpassed our IPO proceeds of 190 mln yuan,” Mr. Shao said.

Headquartered in the Jiangsu Province city of Danyang, World Precision Machinery is situated in the strategic industrial nexus that is the Yangtze River Delta, and the firm is among China’s top three high-tonnage, high-performance stamping machine manufacturers.

The industrial S-chip play has, since its founding, been focused on mechanical stamping machines, digital control assemblies, plate cutting machinery, metal bending apparatus and hydraulic presses, as well as other metal shaping equipment with a heavy emphasis on in-house research and development.

World Precision is also an accomplished spare parts producer for the home electronics, white goods, automotive, electrical, construction, hardware and aviation sectors, having accumulated and nurtured enough clout to be the producer of choice for a growing number of established Japanese brands. 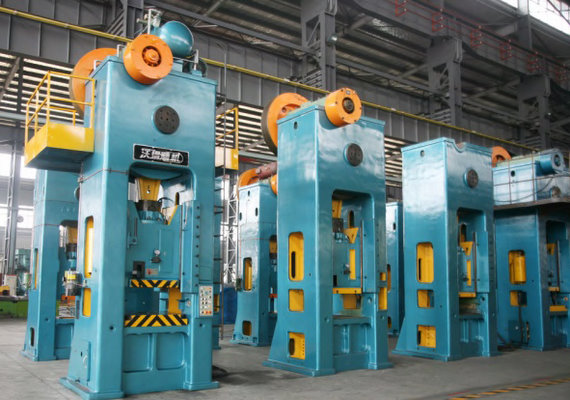 At World Precision's factory: Row after row of stamping machines that it has manufactured for use to mass-produce parts for industries such as automotive, home appliances and railway. Photo: Company

Mr. Shao explained the World Precision Machinery has a technical cooperation partnership with Japan’s Aida, with the Jiangsu-based firm meeting the needs of the Japanese firm’s clients in China, including Honda, Cosma, Fisher Barton and others.

World Precision relies on Mainland China for 95% of its orders, and Mr. Shao expressed confidence that the firm’s business will continue expanding apace even if the PRC economy slows going forward.

He said this is because World Precision Machinery is in a healthy growth phase and the firm is strong and flexible enough to withstand any slowdown or market correction.

“Perhaps our overall growth will slow down in some areas, but we feel this is actually a blessing in disguise in some ways because it gives us the opportunity and motivation to make necessary adjustments to our product mix.

“We will continuously push for advances in technological innovation and quality improvements, and we believe that our products will continue to enjoy cost advantages over more expensive imported equivalents,” he added.

The other two plants, newly added to the group since 2008 and 2009, respectively, specialize in heavy duty, high-tonnage, high-performance stamping beds and digital control assemblies.

These three factory complexes last year operated at over 60% utilization capacity, with a great deal of the credit going to the highly efficient and cost-effective use of precision digital control technology – an area in which World Precision has made several breakthroughs.

Mr. Shao said the company was committed to continuous improvements in production efficiency and utilization rates.

“Traditional and digital production processes have helped us win the honor of being named a ‘Select High-Tech Enterprise' in Jiangsu Province, a coveted distinction which allows us to enjoy preferential tax rates of just 15% versus an average of 25% for our competitors. 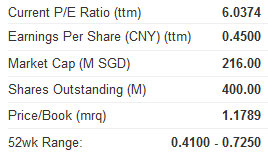 “We are also applying to get a similar distinction in the field of heavy-duty, high-perfomance, high-tonnage stamping machine technology.

At the same time, Mr. Shao also pointed out that so as to allow World Precision Machinery to take advantage of the numerous market opportunities in the Bohai Bay region in China’s northeast, the firm was currently constructing a heavy-duty, high-perfomance, high-tonnage stamping machine manufacturing establishment in the Liaoning Province city of Shenyang, as well as a heavy-duty, high-tonnage digital control bed.

Both facilities are expected to benefit greatly from the high demand for industrial supplies in the area and a rich abundance of industrial raw materials.

“The new plant should be operational by the second half of this year, with the first phase budgeted at around 300 mln yuan. I am confident that this will help propel World Precision Machinery to the a new peak,” Mr. Shao said.

We have 764 guests and no members online