INNOTEK: Will its dividend payout be as generous as before? 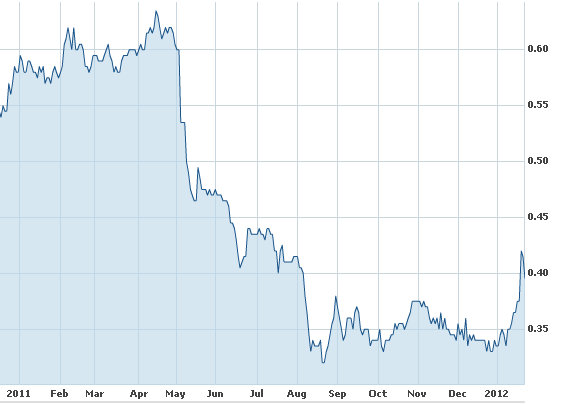 
Value Investor, who is vested in InnoTek shares, contributed the following article to NextInsight

Before it changed its name, the company used to be a supplier of a key hard disk drive part (the suspension assembly).

In 2007, it exited this low-margin, heavy-capex business for US$123 million to focus on its better-performing China-based metal stamping business.

The stock was sold off by the market late last year after management's guidance that its profitability in the 4Q2011 and 1Q2012 could be challenging.

However, its shareholder-friendly management could catalyze the price movement of the stock next month when it reports the full-year results.

This is because Innotek's management has proved to be extremely shareholder friendly on two counts.

With a cash-laden balance sheet, Innotek has undertaken very aggressive buyback of its shares.

They have also doled out hefty dividends to shareholders in the last two financial years.

Investors were rewarded with 5 cents payouts consecutively.Whilst some investors may question their decision to buy into a property trust, Sabana REIT has provided Innotek with a high single digit yield.

After subtracting borrowings of S$29.5 million from their cash pile of S$60.5 million, Innotek has approximately net cash of 13.7 cents per share.

This implies that about 33% of its market capitalisation is net cash.

With a shareholder-friendly management, Innotek could continue to be generous with their dividend payout.

Working on a conversative base case where management makes a hefty 50% cut in dividend (paying out 2.5 cents), the stock still trades at a very attractive 5.95% yield.

Should management decide to continue with a 5-cent payout, Innotek's dividend yield would be a lofty 11.9%!

These scenarios suggest that investor interest could return to the stock ahead of the FY2011 results announcement.

0 #2 Grateful 2012-02-21 18:02
Yes! Innotek has announced 5 cents dividend! Its more than 10% yield! Cheers to Value Investor for sharing. Can Admin share the Value Investor's email? I wish to buy him a coffee cos I also bought into Kep Land which has done very well since too. I am an average Singaporean learning stock analysis to supplement family's income, so please feature more of Value Investor's articles so that we all wil Huat ar!!!
Quote
0 #1 Exclusive 2012-01-27 09:22
In this forum thread a couple of good points were raised about div payout by Innotek. http://nextinsight.net/index.php/component/ccboard/view-postlist/forum-3-sgx-stocks/topic-3232-innotek

1. Is it likely the company will pay 5-c (or even 2.5 c) dividend when its profit for the year will not cover it? If it does so, it would be a return on capital as it woould not be coming out of operating profit.

2. Cash & cash equiv has gone down substantially as at end-Sept. From $96 million to $54 million. This lowers the chances of Innotek paying 5-c a share in div.

We have 583 guests and one member online