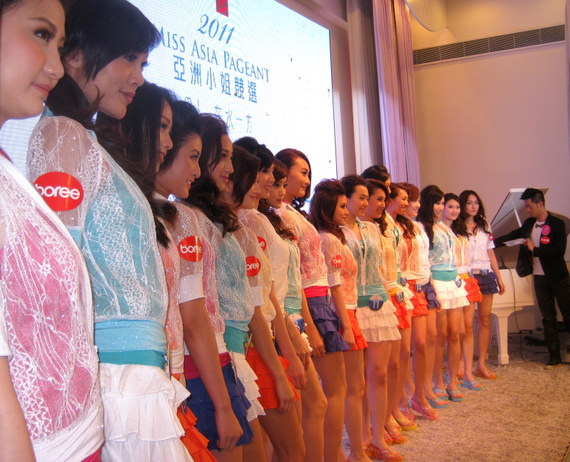 Fantastic Feet! These 18 beauties modeling Baofeng's latest casual footwear have been through rigorous stages to make it to the finals of the upcoming Miss Asia Pageant 2011... quite a feat! Photo: Andrew Vanburen

NextInsight was there, camera in hand of course.

As the official casual footwear supplier to the upcoming Pageant, the Hong Kong-listed firm -- along with media partner Asia TV – had a collective foot in the door to the marquis event by being able to host a luncheon at the Palace Restaurant smack in the heart of Hong Kong’s shopping mecca of Tsim Sha Tsui on bustling Nathan Road.

“We are honored and delighted to be a part of this grand Pageant tradition, and seeing this room full of our friends and supporters, as well as so many beautiful contestants, makes all the travel and preparations well worth it,” said Baofeng Modern CEO Chen Qingwei.

Baofeng is no stranger to mixing with models, as NextInsight’s coverage of their flagship store opening in Hong Kong’s busiest shopping district – complete with video – can be seen here.

But the stunning women donning Baofeng’s Boree label line of casual footwear on the catwalk last week were anything but ordinary models, as one of them will very likely be crowned Miss Asia 2011. 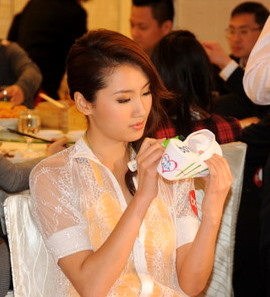 Therefore, the young ladies making their way down the elevated walkway that stretched through a large hall of tables were certainly as much an attraction as the eye-catching line of Baofeng’s Spring/Summer casual footwear they wore.

And of course, to help the beauties prepare for the rigors of real-time judging, all 16 tables of onlookers were given the chance to vote for their favorite catwalk contestant.

The 18 contestants were also given a chance to rest their feet halfway through the event as the catwalk was transformed into an expansive easel with the young beauties sitting alongside, doing their best to decorate Baofeng’s Baoren line of casual footwear with a kaleidoscope of colored markers in a five-minute time period.

Therefore, some of the most beautiful women in Asia were finally given a chance to be judged on the beauty of their artwork rather than just their own physical attributes.

The afternoon then took a luxurious turn, with models taking to the catwalk to show off Baofeng's latest offerings crafted along with new partner -- global king of crystal Swarovski.

Finally, the event concluded with the sudden appearance of a group of professional models sporting Baofeng footwear emblazoned with the logos of all 30 National Basketball Association (NBA) teams.

This was thanks to Baofeng inking earlier this year of a joint promotional deal with the Association wherein Baofeng is licensed to imprint the team logos from all 30 NBA teams on their slippers and sandals, potentially making their wares even more attractive to a much larger demographic. 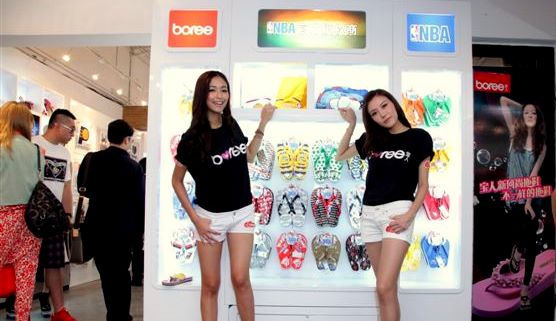 We have 659 guests and no members online