This article was posted recently on remisier Ernest Lim's blog, http://www.ernestlim15.blogspot.com/, and is reproduced with permission.

Before this roller coaster ride, I believe most retail investors have not heard of Leader. Firstly, the company is an S-chip with a market capitalization of only SGD94m.

It does not have an investor relations firm and does not publish any company contacts for shareholders and potential shareholders.

Currently, Leader is covered by one analyst from DMG.

What piques my interest in this company is the industry that it is in.

Companies such as Leader which provides environmental protection solutions seem to be in a sweet spot, especially as China aims to establish an environmental friendly society in their 12th Five-Year Plan.

I managed to arrange an appointment with Mr Lim Poh Yeow, Leader’s CFO (“Management”) for a 1-1 discussion on Leader’s business and prospects.

Below are the key takeaways from the meeting.

Quite a handful, isn’t it? 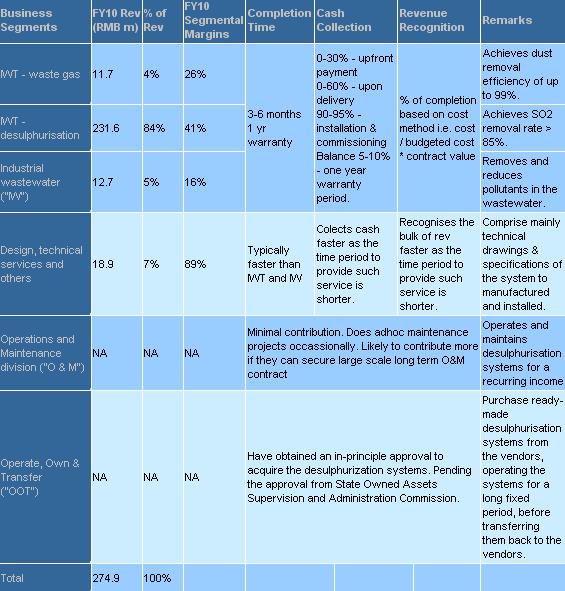 Price slumped due to…

Management is puzzled about the plunge in its share price.  However, he assured me that the company’s fundamentals remain sound.

As they are in a growing industry, there is no lack of contracts but the company is choosing contracts with better margins. In response to this, I pointed out that Leader has not announced any new contracts since 10 May.

Management explained that Leader typically announced contracts when they have a cumulative size of around RMB100m.

As the contract award season is usually around April to August, it is likely to have more updates on its order book and new contract wins in the next 1-2 months.

Furthermore, the drop in share price is also unlikely to be due to its results as Leader announced a good set of 2QFY11 results. 1HFY11 revenue and net profit after tax jumped 57% and 81% respectively to RMB45m and RMB11.8m respectively. 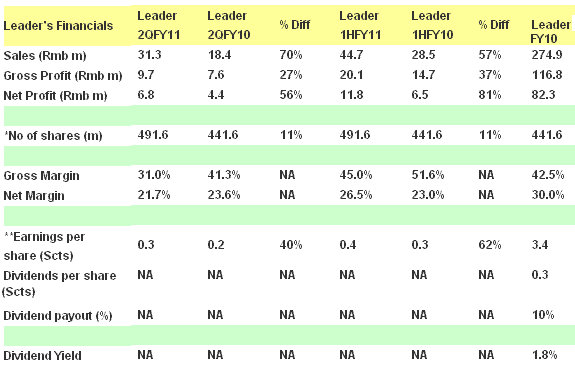 Based on Table 2 above, Leader 1HFY11 significantly lags behind its FY10 results.

However, it is noteworthy that Leader’s 2H results are typically stronger than 1H.

This is because Leader’s mainly operates in the northern parts of China where they usually experience harsh winter conditions from Dec to Mar.

As a result, Leader undertakes most of their manufacturing and installation works between April and November. Thus, 2H is usually much stronger than 1H.

Partly due to the lumpiness of their existing business, Leader is venturing into the O & M and OOT business so as to generate a more stable stream of revenue and income.

According to a DMG report, the OOT business may generate gross margins as high as 40%. Nevertheless, the O & M and OOT are still a “work-in progress” stage and we would have to wait for further updates on this.

For investors who are interested in China’s environmental industry, yet are not afraid of taking S chip risk, it may be worth their while to take a deeper look into this company. According to Bloomberg, Leader trades at FY11F PE of 3.6x.

0 #2 Canon 2011-08-02 15:32
Paul, thank you for the info/rumor. LOL. Seriously, do you think the sale is over? I see the stock has rebounded somewhat. Do u think Leader Env's fundamentals are beautiful?
Quote
0 #1 Paul Chen 2011-08-02 02:22
The drop was rumoured to be fire-sales by a a Pre-IPO Hedge Fund holder under redemption call
Quote
Refresh comments list
NextInsight.net

We have 502 guests and no members online