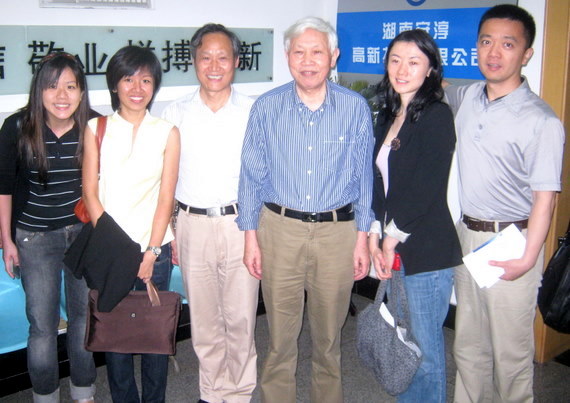 Anchun International Holdings Ltd (SGX: AIH), a producer of equipment used in the synthesis of ammonia and methanol for downstream products including fertilizers and urea, has just had a challenging quarter.

However, management says its order book is healthy, and both geographical market diversification and product differentiation will help expose Anchun to a broader client base and strengthen its results.

NextInsight recently accompanied several fund managers to Hunan to meet with management as part of our 'Discover the Dragon' series of visits in China.

It rained for most of our two-day outings with Anchun executives. 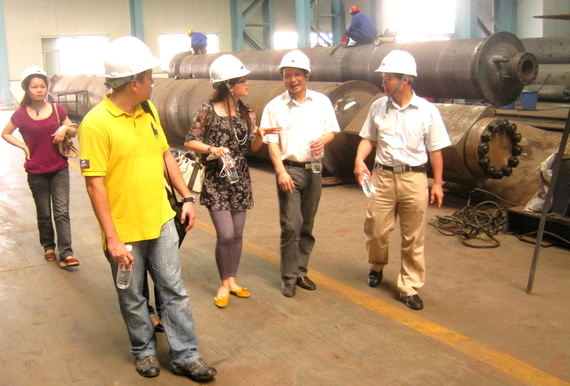 Therefore, it was somewhat hard to envision the situation in provinces just a few hundred kilometers to the north and northeast, which have been enduring droughts these past several months.

Due to the dry spells afflicting several heavily agricultural provinces beginning late last year, fertilizer manufacturers have been negatively impacted by the subsequent drying up in orders.

"One of the major reasons for our first-quarter performance was the drought in Anhui, Jiangsu, Shandong and other provinces. Farmers in these regions are major downstream clients of ours, and when the rains stop, planting slows and so do new fertilizer orders,” said Xie Dingzhong, executive chairman & CEO of Anchun.

Although this impacted Anchun and all of its peers, Mr. Xie was confident that this weather-related phenomenon that would turn around when the rains resumed to normal levels.

"It's a chain reaction. Farmers cut down on orders when there is insufficient water and producers of upstream equipment across the country are affected.

“But not only are we looking to diversify across more regions in the PRC, but we have concrete plans to venture into petrochemical, chemical and coal-based chemical engineering and equipment technology operations, thus giving us exposure to a wider clientele. This makes us less reliant on the fertilizer sector.” 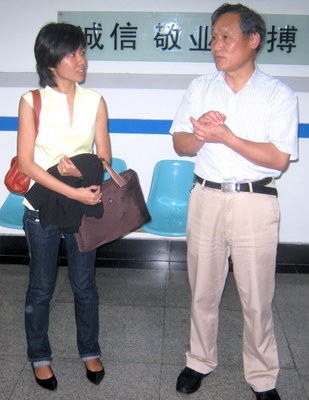 Coupled with rising coal prices on surging demand for electricity generation feedstock, many of Anchun’s clients have delayed their capacity expansion plans.

As a result, Anchun’s top and bottom lines took a hit this past quarter.

Mr. Xie, who is an accomplished research scientist in chemical engineering, added: “We have seen gradual signs of recovery in demand for our products and services as we recently clinched several new orders.

“With the positive long-term prospect of the industry, we continue to be optimistic about the long-term prospects of our business in view of the trend of reducing both energy consumption and pollution supported by the PRC’s 12th five-year plan,” he said.

The chronically blue skies in China’s drought-stricken agricultural heartland were making for a cloudy industry outlook.

Meanwhile, contribution from chemical systems and components (CSC) was down 59.6% at 22.3 mln yuan following the execution delay of customers’ expansion plans, indicated by the reduction in number of contracts completed during the period. 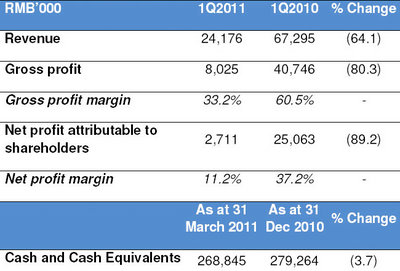 However, Anchun took strong encouragement from its ability to bring existing contracts to full completion.

“We experienced no cancellations or defaults in existing orders on our book during the first quarter,” Mr. Xie said.

In line with Anchun’s lower equipment sales, revenue from the catalyst manufacturing segment in the first three months came in at 1.4 mln yuan, down 63.5% year-on-year.

The downturn was partially mitigated by the 20% increase in average selling prices as Anchun altered its sales mix to include more alcohol-hydrocarbon oxidative and reductive catalysts during the period.

"We are looking to diversify our operations so we can be less-exposed to weather-related regional downturns. We are quite capable of converting our production lines to making different products," he added. 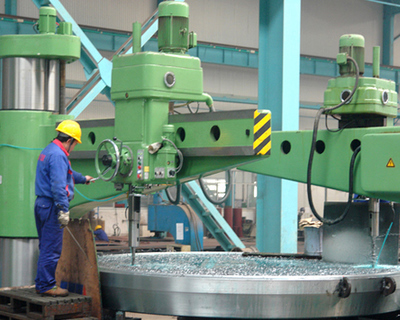 In the midst of rising coal prices, fertilizer manufacturers were likely to place much more emphasis on minimizing costs and enhancing production efficiency in order to remain competitive, Mr. Xie said.

Smaller players with poor production efficiencies will be gradually phased out due to intense margin pressures, which in turn help to ease the overcapacity situation that is plaguing the fertilizer industry in China.

“Stricter environmental regulations are also winnowing out our less competitive, smaller peers who are being phased out which is of course good for our company’s competitive standing in the industry,” he said.

However, Anchun is well-equipped to comply with all existing regulations on both wastewater treatment and emissions controls, Mr. Xie added.

Downstream consolidation was also a net positive for Anchun over the long term.

Over 83% of domestic ammonia producers -- primarily producing fertilizers – currently operate inefficient and smaller plants, with capacity of less than 180,000 tons/year. 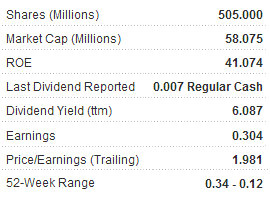 “We have in place technology that allows us to help reduce coal consumption by between 30-50%.”

However, he said that besides praying for rain in drought-afflicted areas, Anchun would continue to face challenges in three areas: relocation, new plant approval and organic capacity expansion authorization.

“But we are not alone and all of our domestic peers face the very same challenges,” Mr. Xie added.

Xie Dingzhong, executive chairman & CEO of Anchun: We experienced no cancellation or default in existing orders on our book during the first quarter. As of May 13, our order book stood at a total of approximately 157 mln yuan. We have both new and existing client orders now. In the first eight months of this year, we are looking at around 150 mln in orders from new clients. Our total in 2010 was around 300 mln. We are also preparing to sell overseas, beginning with clients in Africa, many of whom are looking to produce ammonia and methanol in-country as part of import replacement plans. Also, to boost our order book, we continue to participate in as many relevant trade shows and exhibitions as possible.

Greenrookie: How much contribution to the order book do they expect from China XLX establishment of its 4th plant and when will they materialize?

Xie Dingzhong: China XLX Group is a long-time client of ours but we have many well-known customers including Sinofert Group, Shanxi Tianze, Jincheng Anthracite Mining, Yunnan Yunwei, China Haohua and Guizhou Kailin. We are comfortable with our client mix.

We announced earlier this year that Anchun Intl Holdings and Hunan Anchun Advanced Tech -- our wholly-owned subsidiary -- entered into a JV agreement with Henan XLX Chemical Group -- a company incorporated in the PRC for establishing of a JV company, to be named Henan XLX Anchun Catalyst Co Ltd which will undertake manufacturing, distribution and sale of reductive catalysts and related services.

Upon incorporation, the JV will have an issued and paid-up capital of 20 mln yuan. The shareholding structure of the JV will be as follows: Hunan Anchun: 49% and the amount invested 9.8 mln yuan; and Henan XLX's interest in the JV is 51% (10.2 mln). The JV will undertake the construction of the largest reductive catalyst production plant in the PRC.

The total investment for the construction of the plant is approximately 40 mln yuan. The JV will have a paid up capital of 20 mln yuan and will be granted shareholder loans amounting to 20 mln from the shareholders in proportion to their equity interest. Accordingly, Hunan Anchun will invest a total of 19.6 mln which consist of a capital investment of 9.8 mln for 49% of the shareholding of the JV and a loan to JV amounting to 9.8 mln.

Greenrookie: How is the consolidation of the fertilizer industry beneficial to the company?

Xie Dingzhong: Among our competitors, smaller companies are being phased out for failing to achieve economies of scale and others for not complying with stringent NDRC environmental and safety requirements. On the downstream fertilizer side, we see consolidation as a net positive because it will help temper price volatility, keep selling prices at a more stable high level and help streamline our distribution and logistics expenses.

ANCHUN Is In A Sweet Spot, Expect Contract Deals Soon

ANCHUN INTERNATIONAL: 2010 Profit Up 24%, This Year To Be Stronger?

0 #2 Linda 2011-06-25 07:23
Dear Lin, it's not useful to look at P/E of 2 as it is based on FY10 earnings. The future is what matters. 1Q earnings were down and at this rate the PE for this year would be double digit for sure... Unless the company's biz returns to normal SOON.
Quote
0 #1 lin 2011-06-23 15:28
Sub-2 P/E and strong govt support? Not sure what's keeping share price down, but surely upside risk outweighs downside
Quote
Refresh comments list
NextInsight.net

We have 920 guests and one member online