AUSGROUP: Heading towards an inflexion point in 2H of calendar year 2011 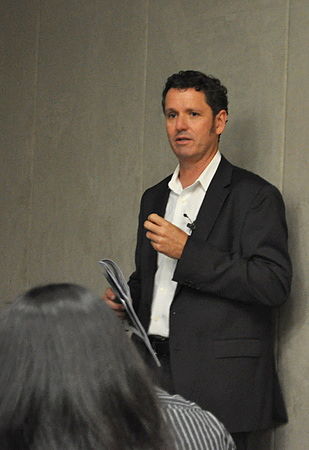 Based in Perth, John Sheridan, CEO of AusGroup, told investors at CIMB yesterday that the company has a strong outlook. Photo by Leong Chan Teik

THE WAY AusGroup’s CEO sees it, the company is moving towards a sweet spot in the second half of calendar year 2011.

It is set to clinch more work and its profit margins will recover to pre-financial crisis levels, resulting in a healthier net profit.

On the first point, Mr John Sheridan said during a presentation at CIMB yesterday:

On a conservative basis, AusGroup is ‘reasonably certain’ of submitting formal tenders over the next 12 months for A$1.6-2 billion worth of work.

* AusGroup has submitted tenders for A$446 million worth of work as of Feb 11 this year, whose results have not been announced. Typically, AusGroup is successful in about 30% of its submissions.

“A rebuilding of our order book is expected in the second half of this financial year (ending June 30),” said Mr Sheridan.

The basis for the optimistic outlook for work includes annual investment in the oil and gas sector in Western Australia amounting to A$10-25 billion over the next 5 years.

In the mineral resources sector, the annual figure is projected to be A$4-5 billion.

Among other things, AusGroup does fabrication and manufacturing for projects in the mineral resources sector. Photos: AusGroup

AusGroup derives revenue in roughly equal proportions from these two sectors, and primarily from Western Australia.

On the second point, Mr Sheridan said that net margins have been under pressure because of a lack of contracts secured during the global financial crisis and tight margins for the work that was secured because of stiff competition.

With global demand for oil and gas, iron ore and mineral resources shooting up, AusGroup is submitting tenders for the vast amount of work available based on healthier margins.

As a result, AusGroup expects to return to “more normal levels” of net margins of 4-5% in the second half of the current calendar year, which are much higher than the sub-2% reported last week for its financial result for the six months ended Dec 2010.

For the next quarterly result (for the period ending March 2011), however, revenue is expected to decrease slightly compared to 2Q2011 as several projects reach completion.

Earnings would still be weak due to lower business, timing-related profit recognition issues, and tight margins.

The turning point in its results could be in the 4Q of FY2011 and beyond.

CIMB analyst Yeo Zhi Bin, in a report on 14 Feb, has noted the improvements in business, saying: “With an expected improvement in margins, stronger order momentum and rationalising of fabrication division, we think that the turnaround has begun … but not yet at inflection point. However, we have already factored such an improvement in our earnings model. We prefer to see sustained margins expansion or sizeable orders before turning positive.”

He has an ‘underperform’ rating on the stock and a target price of 42 cents.

We have 432 guests and 4 members online