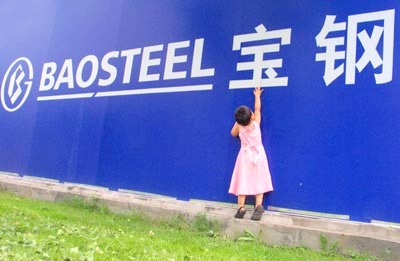 On a day of relatively high trading turnover reaching over 162 bln yuan, listed financial institutions shouldered the heaviest load in the afternoon session, with lenders the biggest standouts.

However, banks were not alone as resource stocks and automobiles jumped sharply following an announcement from China’s State Council -- the country’s Cabinet – that it would push forward with restructuring and consolidation of the overcrowded steel and energy sectors.

Coal mining enterprises and steelmakers, themselves heavy users of coking coal, all finished in positive territory following the Cabinet announcement.

The Shanghai Composite, the benchmark index for A-shares, tried to break through the psychologically significant 2,700-point level, but met resistance throughout the afternoon and had to settle for finishing just shy of the mark.

As a whole, banks and industries seen benefitting from state-sponsored restructuring and consolidation pulled the index higher, and analysts expect there is still more wind left in the industrial support sail.

Insurers also continued to digest recently released positive news on the policy front, namely that they would now be permitted to buy shares issued by unlisted firms and property in the latest attempt by economic regulators to grant more productive and high-yield investment options to cash-rich insurance firms.

Beijing has slowly been easing restrictions on insurers' investments these past few years.

The China Insurance Regulatory Commission (CIRC) announced last month it would permit insurers to purchase a greater variety of stocks and bonds, with all shares on the Hong Kong main board fair game.

Among Shanghai-listed A-share firms, 501 finished up today while 312 lost ground, with mainly small to mid-caps counters and well as newer technology firms in the losing category due to less expected benefits from industry restructuring and consolidation across the broad expanse of China’s economy.

Auto stocks also benefitted from news over the weekend that the country’s economic regulator would do more to promote electric and hybrid vehicle makers.

Also moving the markets today was a general consensus from analysts that the August inflation rate will hit an annual high water mark, but that mortgage levels will not surpass July totals. 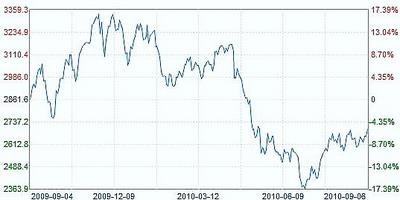 Year of Living Dangerously? The benchmark Shanghai Composite Index is currently around 5% below year-earlier levels

Beginning September 3, mills in the province began facing strict electricity rations, with at least 40 steel mills and coking coal processing plants in the region forced to temporarily halt output on the new restrictions.

Investors interpreted this development as being very positive for near-term steel prices and bought shares in steelmakers accordingly.

Baosteel wasn’t alone as over 90% of listed steelmakers finished in positive territory today.

Some brokerages gave an even more impressive performance with Guojin Securities (SHA: 600109) and Guangfa Securities both up their daily limits of 10% to 16.90 yuan and 32.66 yuan, respectively.

Insurers continued to digest the positive news on the investment liberalization front.