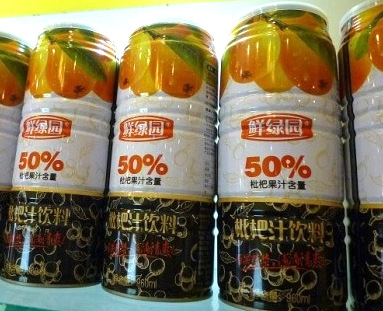 In particular, Newman9 alleged that Sino’s Garden Fresh beverage brand, whose key product is loquat juice, could not have achieved a high gross profit margin (GPM) of around 40%, when Huiyuan, an established beverage maker in China, recorded a lower GPM of 30%.

He also believed that Garden Fresh sales figures have been inflated many times.

It would be enlightening to look closely at China Minzhong, which cultivates, produces and sells processed and fresh vegetables. It has been quietly building up its beverage business with loquat juice and loquat tea as its mainstay.

Minzhong has recently announced its 1QFY15 performance and revealed the strong sales of its loquat beverages. Let's compare some historical data of Minzhong and Garden Fresh: 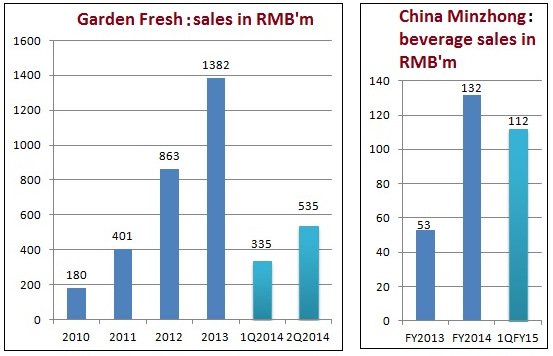 Though not a first mover, Minzhong has been able to replicate Garden Fresh's rapid sales growth of loquat beverages. (Note: Garden Fresh's financial year ends in December while China Minzhong's, June).
Loquat juice was first introduced in 2010 by Garden Fresh. Despite being a new product, loquat juice was able to gain early entry into well-known international supermarket chains, instead of beig sold from mom & pop shops first to prove consumer acceptance.

After establishing a foothold in the supermarket segment, Garden Fresh managed to get into convenience store chains, such as 7-Eleven, which carry only popular items because of the stores' limited shelf space. 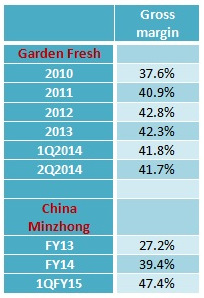 Minzhong’s high beverage revenue growth is not unlike the sales increase reported by Garden Fresh, which many investors have doubted.

Now compare GPM of the two (see table on the right):
Minzhong was able to achieve higher GPM on much lower sales.

Interestingly, the beverage division was Minzhong’s only bright spot in recent times, as its core vegetable business has languished.

Minzhong's executive chairman and CEO, Lin Guo Rong, had this to say of the beverage business in the recently-published annual report of Minzhong (see quotation just below):


For some history of the development of Garden Fresh: It started off with OEMs and waited for sales to pick up before building its own beverage factory.

When its 70,00-tonne Sichuan started producing in 2013, heavy reliance was still placed on OEMs. The 100,000-tonne Hubei factory started production only last month.
In-house production should boost Garden Fresh‘ GPM. It is not known whether Minzhong has its own beverage factory.

Given Minzhong's rising sales of loquat drinks, it is clear that the beverage is fast gaining popularity in China, and the profit margin is good -- still good.

Minzhong was the target of short-sellers’ attack a couple of years ago. The Indonesian Salim Group, a substantial shareholder during the crisis, expressed confidence in Minzhong's management. Minzhong is now majority-owned by the Salim Group after a subsequent general offer. There is little reason to now doubt the integrity of Minzhong’s financial reporting.

The next question is whether Garden Fresh is very much larger than Minzhong’s beverage business. A recent survey by Frost & Sullivan shows the following market shares of the 3 top players:

It is quite clear that in the loquat juice segment, Garden Fresh is dominant.

Sino Grandness' Chairman Huang Yupeng has mentioned previously that Garden Fresh's successful beverage sales and good profit margin will attract more F&B players into this niche. But he is confident that Garden Fresh will stay well ahead of its peers.

You can find your answers here..

We have 553 guests and 4 members online