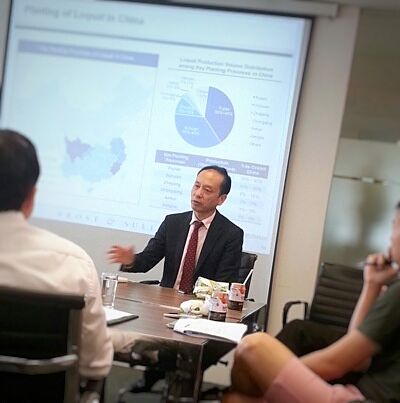 CEO Huang Yupeng at a lunchtime meeting yesterday to explain his business. Photo by Leong Chan Teik1. Short-seller's report said that Sino Grandness' beverage division, Garden Fresh, claimed sales of RMB1.382 billion in 2013 which would have placed it among the top sellers in market surveys carried out by AC Nielsen and Euromonitor. However, Garden Fresh does not figure at all in the lists.

In AC Nielsen's list, The Coca Cola Company is No.1 with a 23.6% market share and retail sales value of RMB6.7 billion, implying the entire market is valued at RMB28.4 billion.

In Euromonitor's list, The Coca Cola Company is also No.1 but with a smaller 13.7% market share but sharply higher retail sales value of RMB15 billion. This implies that the entire China juice market is worth about RMB109 billion.

These discrepancies may be explained by the fact that (1) different market researchers adopt different methodologies, (2) their work is done through interviews with many relevant parties and based on sales data collected from many parties, and (3) these research houses are usually engaged to do work for different F&B players.

Another research house, Frost & Sullivan, has been engaged by Sino Grandness to do market surveys and report the findings for inclusion in Garden Fresh's IPO prospectus. Not too surprisingly, Frost & Sullivan has a different set of figures. It estimated the juice market to be valued at RMB179 billion.

Thus, each of the three researchers' estimate of the market size in 2013 differs by a whopping RMB70 billion from the next one!

Because of the massive gaps, it is easy for Garden Fresh's RMB2 billion or so of retail sales to be unaccounted for in AC Nielsen and Euromonitor surveys. And simply because it is a new kid on the block, and the principal beverage of Garden Fresh, loquat juice sales could have been overlooked.

Frost & Sullivan's market survey is described as being more far-reaching as it includes, among other things, an Asian Specialty segment (covering juices such as loquat, longan and hawthorn). This segment accounts for 14% (or RMB25 billion) of the entire juice market.

About RMB2.48 billion is attributed by Frost & Sullivan to loquat juice, a beverage for which Garden Fresh is the undisputed No.1 producer in China and the first to actively promote and bring to market from 2010. 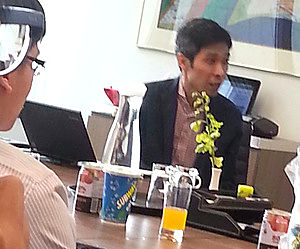 Parry Ng, vice-president for investor relations, Sino Grandness.Sino Grandness officials point out that Garden Fresh is being compared with peers with different products. Unlike Garden Fresh, its peers Tingyi and Uni-President do not offer mid-to-high juice content beverages and they have product categories such as instant noodles.

And in comparing with Huiyuan, note that, until recently, it bought its orange puree from a related party while Garden Fresh manufactures its own loquat puree from loquat fruits it bought from farmers, saving some costs in doing so.

Huiyuan's margins are dragged down also by its relatively massive fixed assets of about RMB8 billion, resulting in higher administration and other related costs plus higher depreciation.

In contrast, Sino Grandness has invested RMB1.5 billion in fixed assets, of which RMB550 million is attributable to Garden Fresh.

3. Short-seller's report says Garden Fresh "purportedly does sales per salesperson of RMB 4.6 million or 3x the productivity of peers" while the sales people appear to get paid about half as much.

Sino Grandness officials explained that it's, again, a comparison of apples with oranges. In Garden Fresh's business model, distributors are appointed to target various channels such as 7-Eleven chains, Walmart, etc all over China.

By appointing these distributors, Garden Fresh does not need to employ as big a number of sales people as other F&B players who are more established. The latter seek to bypass middlemen and sell directly to the retail chains. For that, they hire as many as a few thousand sales people.

4. Short-seller's report says Garden Fresh had overstated that its 3 OEM manufacturers had 210,000 tonnes of capacity in total. The OEMs have only 130,000 tonnes capacity, says the short-seller, citing data it had gathered from their websites. 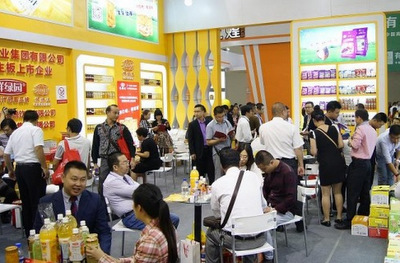 @ Sino Grandness' booth at the Chongqing trade fair this month: Sino Grandness said it garnered RMB300 m of indicative sales orders there. Photo: CompanySino Grandness officials said that the 3 OEMs cited, being private entities which have been around for many years, had not updated their websites with details of their expanded capacities.

Furthermore, Sino Grandness actually has 6 OEMs (not 3) who in aggregate have 600,000 tonnes of capacity. (Of course, these OEMs' aggregate capacity is not entirely dedicated to Garden Fresh but serve other customers too).

The credibility of Garden Fresh's OEMs should not be in doubt as they have constantly been the subject of due diligence. Recently, they were checked upon by "external parties" involved in the proposed IPO of Garden Fresh, as well as by Thai strategic investors. Other parties through the years have also checked on the OEMs, such as Sun Hung Kai and Goldman Sachs prior to the issue of two tranches of convertible bonds.

5. Short-seller's report cites data showing that China's canned asparagus export volumes have been steadily declining from 2005 until 2013, yet Sino Grandness had reported a sales uptrend.

Sino Grandness officials said that the company had simply been capturing more market share from weaker players. With the outbreak of food scandals in China, big supermarket chains in Europe that Sino Grandness has long been supplying directly to decided to buy more from their trusted manufacturer.

In addition, when the global financial crisis hit, the smaller Chinese manufacturers faced cashflow issues which Sino Grandness could avert because it had raised capital through its IPO in Singapore, and was thus in a position to extend better credit terms to its customers in Europe.

-2 #4 scary 2014-10-26 20:56
market studies is not much use if they dont account for the trend when fruit juice become well known as a cancer causing agent.
Journal of the American Dietetic Association publish below article.

Scientific evidence: In a study of nearly 1,800 people, those who drank the most fruit juice (more than three glasses a day) were 74% more likely to develop colorectal cancer than those who drank the least, reported researchers in the October 2011 issue of the Journal of the American Dietetic Association.
Quote
+3 #3 Francis 2014-10-25 13:20
This is one huge growth stock.

You are neither right nor wrong because the crowd disagrees with you. You are right because your data and reasoning are right.
Quote
+5 #2 Support Loquat Juice 2014-10-25 09:12
Very simple.
1. Their 25 min social media marketing video shows they are forward thinking and creative in their marketing. In fact superb marketing effort.
2. Do you know who sits on the board of Thai Tycoon TTA? He is a veteran in F & B. Just a phone call away to his contacts he can just get a very detailed market information. You mean he just sits on the board there and do nothing when TTA plans to buy a stake in Sino G. Of course not. Thai tycoon will definitely seek his F & B expertise. Which makes me think that's why PM group who has a successful JV with Nestle also took a stake in Sino G.
Quote
+1 #1 jonsim 2014-10-24 12:38
it is funny that we believe a short seller rather than the ceo of sino.I am vested and I have full confidence in sino and their operations.The company has reported consistent profitable results and this Nov report will be no different.The bond overhang is the main issue driving the price down and I am surprised no one pursue the IPO issue and get a definitive reply from the ceo.
Quote
Refresh comments list
NextInsight.net

We have 1500 guests and no members online