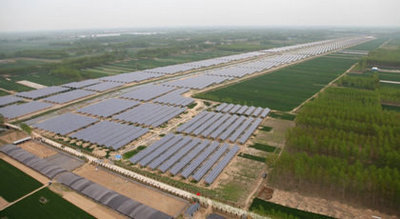 “Both Huabei Expressway and Goldpoly are responding positively to the policies issued by the State Council on promoting the healthy development of the PV industry.

The solar power plant was connected to the grid in 2011 and generated approximately 28 million kWh per year. If 335 grams of coal are required to produce one kWh of electricity, it means the project helps save 9,380 tons of standard coal every year.

Goldpoly will be ensured electricity tariffs -- 2.4 yuan per kWh as expected – which constitute the standard on-grid power tariff offered by the State and the subsidies offered by the Jiangsu provincial government.

Sunwah Kingsway said it is adjusting upward its target price on China Singyes Solar (HK: 750) by 1% to 10.15 hkd while maintaining its “Buy” call on the new energy play.

“Its strong solar EPC project pipeline of ~150MW for 2H13 and the proposed sell of its 100MW solar projects will help the company generate a robust 2H13,” Sunwah said.

Singyes recently 7.88 hkdThe research house expects Singyes to record a net profit of 336 million yuan in the second half of this year and at least 507 million for full year 2013.

“In the future, the company may sell its self-developed solar PV projects, especially to blue chip SOEs who are interested in developing solar IPP business.

“Currently, the company has 2.1 billion yuan of orders on hand and we believe the company will have a chance to achieve our full-year net profit expectation of 559 million.”

Guotai Junan said it is keeping its “Accumulate” recommendation on Comtec Solar (HK: 712) with a target price of 1.90 hkd.

Second half wafer shipments are expected to rebound to 260MW and the current actual annual N-type wafer production capacity is around 550MW and should reach 700MW by 1Q14.

Comtec’s current wafer processing cost is 0.15 usd/W and management targets to reduce it to 0.12-0.13 usd/W by this year.

“We still believe the industry fundamentals will improve in coming two years and Comtec is expected to benefit from its concentration on the N-type wafer business and its healthy financial position,” Guotai said. 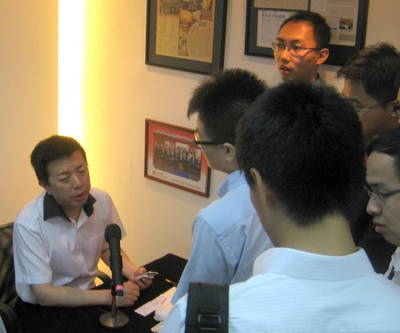 Sunwah Kingsway said it is reducing its target price on Comtec Solar (HK: 712) by 11% to 1.20 hkd while downgrading its call on the solar wafer and ingot play to “Sell” from “Hold.”

Its share price recently plunged by ~18% after disappointing the market with a core net loss in 2Q13.

“Although the company plans to expand its market share, we believe its near-term growth would soon be limited by its capacity constraint,” Sunwah said.

The research house said it believes Comtec’s current capacity of 600MW is far from enough to cater the needs for multiple customers, which may lead to customer concentration risk before the completion of its expansion plan that is expected sometime in 2014.

“We believe the decision to expand is a correct one but there is the risk of a delay.

“For the broad market, the solar wafer maker still does not see any ‘V-shape rebound’ in the industry and they don’t believe polysilicon prices will increase significantly.”

“Rolling forward our valuation to FY14, the new target price implies a 0.76x 2014 PB, which is a valuation that is much more reasonable.”

COMTEC SOLAR Sees Sunnier Prospects With Near Break-Even Half

We have 627 guests and no members online