Credit Suisse said it is initiating coverage of Chow Sang Sang Jewelry (HK: 116) with an “Outperform” recommendation, assigning a target price of 20.0 hkd based on 10x CY2013 P/E, which implies 0.56x PEG.

“We like its stable earnings outlook and 100% self-operated model which allows a flexible expansion strategy as well as prudent inventory management,” Credit Suisse said.

Despite the overall weakness in gold prices as well as jewelry demand, CSS still registered a solid same store sales growth (SSSG) of around 16% YoY in the April-June quarter in Hong Kong and outperformed the overall Hong Kong market growth of 6.8% YoY.

“With the negative YoY change in gold price narrowing, we expect Chow Sang Sang’s earnings momentum to bottom out in 3Q2012 and recover from 4Q onward.” 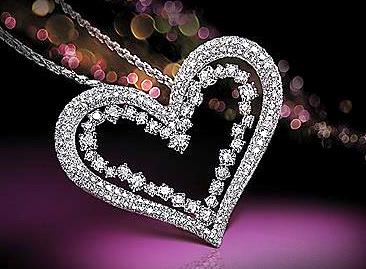 CSS is trading around its lowest valuation range, which in Credit Suisse’s view is not justified.

“In our view, Chow Sang Sang -- among the listed jewelers -- is relatively more conservative in terms of POS expansion and sales promotion, which has resulted in more stable sales performance,” Credit Suisse said.

The note to investors added that jewelry sales “were still doing well.”

“However, thanks to the prudent expansion plan, the rental cost to retail revenue ratio only increased marginally from 3.5% in 1H11 to 3.6% in 1H12,” Credit Suisse added. 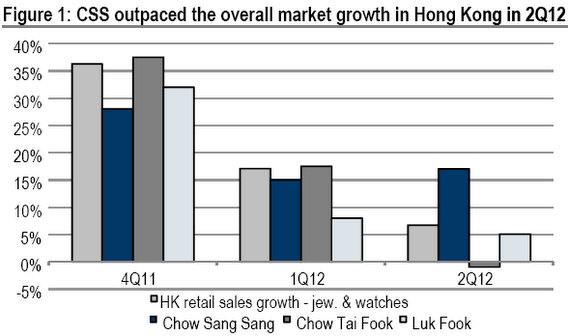 With the negative YoY change in gold price narrowing, Credit Suisse said it expects Chow Sang Sang’s earnings momentum to bottom out in 3Q2012 and recover from 4Q onward.

“Looking ahead into 2H2012, we conservatively assume similar sales momentum as in 1H12, despite the recent gold price rally but expected some gross margin improvement from the rising gold price.

“We believe Chow Sang Sang with its stable earnings outlook deserves to trade at least at the same valuation as Luk Fook (~10x CY2013 P/E), but maybe a discount to Chow Tai Fook (~12x FY3/13 P/E) for its smaller distribution network in China,” Credit Suisse said.

Credit Suisse said it is maintaining its “Outperform” recommendation on Lenovo Group (HK: 992), the world’s No.2 PC maker, following a major deal by the Chinese firm in Brazil.

On September 6, Lenovo announced its acquisition of a Brazilian CE vendor, CCE, for US$148 million, of which 75% will be paid in cash and the rest in stock.

“Brazil PC distribution is concentrated in PC stores (32% of total) and VARs (36%). Foreign brands use VARs as they lack local distribution relationships with PC stores and local dealers. This is where CCE fits in,” Credit Suisse said.

Lenovo knows the advantage of local distribution relationships from its China PC business, the note to investors said.

“CCE delivers on both, and provides entry into Brazil’s smartphone and LCD TV market, and tax savings.”

Credit Suisse added that Lenovo continues to drive operating scale through organic share gains and M&A, and by optimizing manufacturing.

Credit Suisse has a 7.50 hkd target price on the PC firm.

We have 2248 guests and no members online