Nordic Group, a SGX-Mainboard listed company, was chosen to be among 200 public listed companies in the Forbes Asia 2022’s “Best Under A Billion” list, which identified excellent companies with annual revenues under US$1 billion. Nordic provides system integration solutions, repair and overhaul (MRO), precision engineering, scaffolding and insulation services, petrochemical and environmental engineering services and cleanroom, air and water engineering services. And there is Starburst (description below).

In Nordic's 9M2022 business update last week, the maiden contract was parked under "Specialist Structural Engineering Services division" and Starburst was not mentioned by name.

Mr Astro Chang, who took over the helm of Starburst post-acquisition, said the $10 million of work has been delayed and will be executed in 2023 after the completion of civil works by a main contractor.

He added that $130 million worth of fresh tenders submitted by Starburst are awaiting decisions by clients, mainly in Singapore. 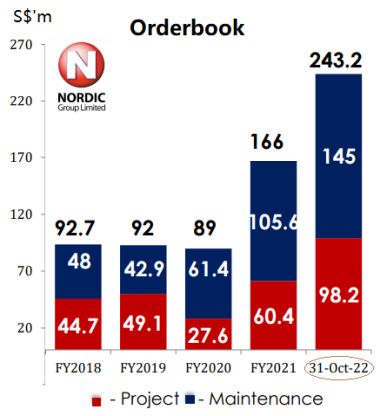 Depending on the success rate of the tenders and the timeline of award, Starburst potentially could cause a spike in Nordic's orderbook in 2023.

Meanwhile, last week Nordic announced the group's latest batch of contracts worth S$76.5 million clinched by all the various divisions of the group, including Starburst.

This brings the outstanding orderbook, including a maiden addition of S$8.4 million from newly-acquired Eratech, to a record S$243.2 million as of end-Oct 2022 (see chart).

This lays a foundation for continued earnings growth next year, especially from subsidiary Envipure with its bulging orderbook from the semiconductor industry.

And this year? In all likelihood, it will be a year of record profit, and here's why:

Year-to-date, Nordic's cashflow, a S$5-million sale of treasury shares and a S$3 million sale of an industrial property have led to a sharp fall in net debt. 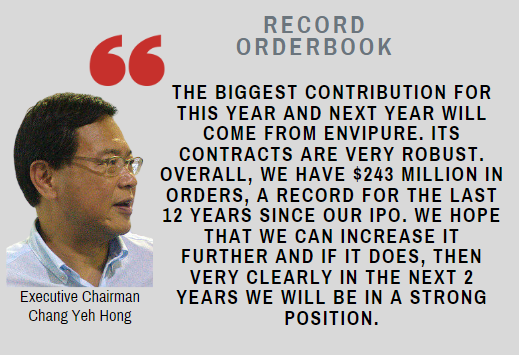 The 9M2022 presentation deck is here.

We have 942 guests and no members online