Singapore-listed Food Empire Holdings is a global branding and manufacturing company in the food and beverage sector. Its products include instant beverage products, frozen convenience food and snack food. Food Empire’s products are sold in over 50 countries.

Inclusive of a one-off US$15 million gain on its property sale, its 9M profit came up to US$49.6 million, which far exceeds 2021's entire year profit of US$19.5 million (see table below). 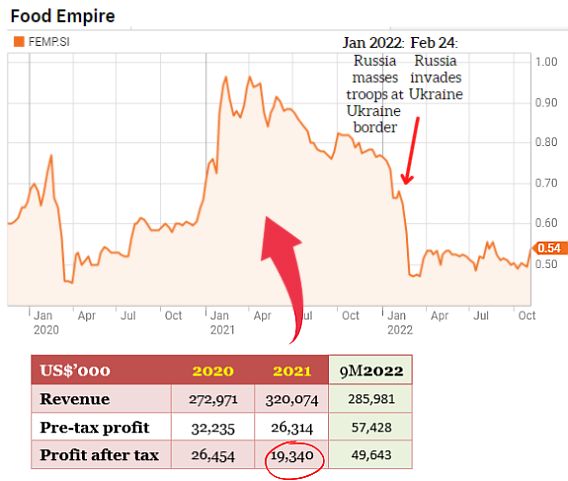 Food Empire stock traded above 80 cents for most of 2021. After being impacted by the initial Russian invasion of Ukraine, the stock has yet to respond to the company's rollout of strong quarterly profitability.

Food Empire enjoyed higher average selling prices across most of its business segments, with revenue for 3Q2022 increasing by 42.1% to US$108.6 million, boosted mainly by Russia and South Asia.

South Asia, or specifically India, is where Food Empire has two plants producing instant coffee for international sale, and are operating at near maximum capacity. The newer of the two plants is a freeze dry coffee plant which commenced operations in 2Q2021. The other is a spray dry coffee plant.

These products are used in-house to produce Food Empire consumer products as well as sold to third parties. (Click here to know the difference between spray dry and freeze dry coffee)

Q: Can you talk a little bit about the results and the group's diversification, especially into South Asia and Southeast Asia?

Sudeep: Russia still stands as the biggest single market and is doing, under the circumstances, very good. But Food Empire is diversified into many many markets,  this is evident from the numbers which you see and this is something which is going to continue.  The geopolitical scenario is not something which is desirable and which was not expected but our business results are what we expected. Even after two years of Covid and a lot of disruptions which still continue in one form or another,  a lot of the markets have started contributing to Food Empire and moving forward that is going to be the story. 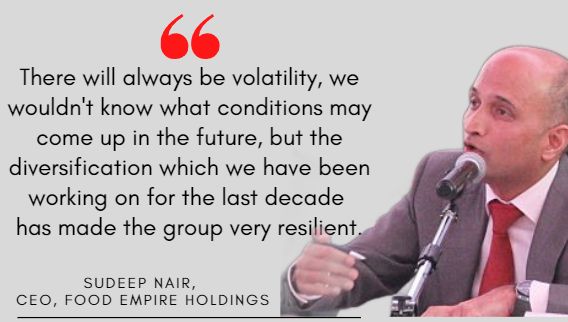 Q: You mentioned that Russian and the Ukraine markets continued to deliver. Why was that the case?

Sudeep: Consumption habits don't change. If a person drinks two cups of coffee they won't stop. Consumption still continues. In Russia we have seen very consistent demand for our products. In fact at times, we had not been able to supply because of certain disruptions and supply chain which still continue.

Q: To follow up on the Russia question, what has actually changed in the third quarter compared to  the first two quarters when Russian market actually declined?

Sudeep: In 3Q, after the Russia-Ukraine conflict broke out, top line growth was not the priority but bottom line was. Once things like the ruble kind of stabilized, from third quarter onwards we could push more volume. This is showing the pricing power of our brands. After having raised prices, we are in a very comfortable position in terms of margins. We are doing promotions which, in turn, are helping to drive up revenue.

Q: The results this year has been quite fantastic. Can shareholders expect better dividends for this year?

Sudeep: If the geopolitical situation doesn't deteriorate beyond what it is today, we would recommend to the board a growth in dividends.


The Q&A content has been edited for brevity and clarity.
For more on 3Q results, see Food Empire's announcement here.

We have 600 guests and no members online