 RE: A new significant growth area. Management has been actively diversifying and expanding MPM’s activities beyond the O&G industry.

As of 1H21, 20% of its utilised vessels are working on offshore windfarm projects in Taiwan.

It has an edge there as: 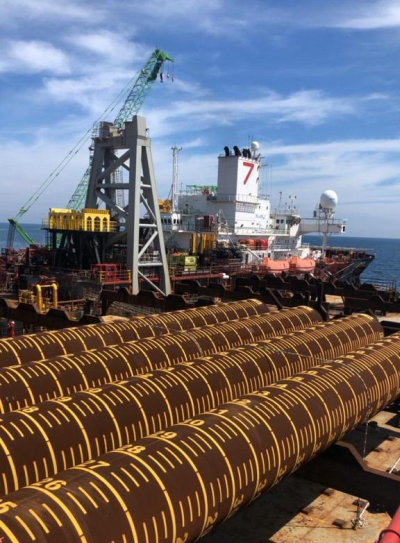 Marco Polo’s vessel, MP Prospect, at work off Taiwan supporting the installation of monopiles, which are  structures driven into the seabed as support for wind turbines. Photo: CompanyWe believe RE is a potential major growth driver – especially with the influx of investments coming into this space.

We believe that MPM will expand its operations in Taiwan, and will likely look to double its chartering fleet in this space by end-1Q22 – then have at least 50% of its fleet servicing the RE sector by 4Q22.

We expect the utilisation rate of its chartering fleet – which is around 60% currently – to rise to about 80% by 2H22. This would also lift its charter rates, thereby further improving its margins and profitability.

 Surging demand for shipbuilding, repair, and upgrades. MPM’s shipyard division has seen strong growth, due to the resumption of O&G activities globally and its foray into RE. In 1HFY21 (Sep), its shipbuilding and repair revenue surged 34.5% YoY, and we expect this strong growth to extend into FY22.

To cope with surging demand, it aims to expand the area of its Dry Dock 1 from 150m which will increase capacity by 20% by 2QFY22.