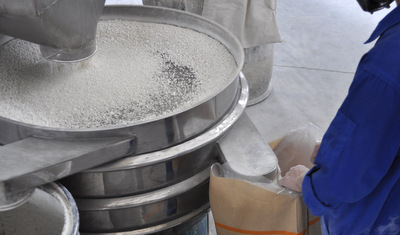 Rubber accelerators being produced at China Sunsine. NextInsight file photo The rise is in tandem with higher average prices of aniline, the major feedstock for rubber accelerators, which has gained an estimated 26% to Rmb6,650/tonne since end-Sep 20.

We believe the cyclical uptick is led by higher demand for vehicle tyres, from sustained growth in China new vehicle sales over the past six consecutive months since Mar 20.

• Rise in vehicle sales looks sustainable. China’s vehicle sales have risen above the 10% mark for the sixth consecutive month in Oct 20 (+12.5% yoy).

This proves that the domestic economy has largely recovered, helped by government stimulus measures.

These measures include the encouragement of vehicle purchases, with more vehicle permits issued in major cities, as well as greater demand for infrastructure-related heavy vehicles due to increasing efforts to resume construction projects.

We believe the favourable policies will continue in the mid-term, driving recovery towards a more normalised level.

Furthermore, growth in vehicle sales is anticipated to continue in the foreseeable future given China’s relatively low penetration and expanding middle class.

Furthermore, higher vehicle sales in China is expected to drive increased demand for tyres, hence leading to a potential 10% rise in the ASP of rubbers accelerators from a low base in 2020.

We have 772 guests and no members online