CSE is also exploring how it can collaborate with its new major share holder, Heliconia Capital Management, on both M&A strategy and pursuing new growth areas.

The latter had bought its stake back in 2018.

Sectors of interest include the Internet-of-Things (IoT) connectivity, automation, communication and security services.

When asked about the circumstances behind Serba Dinamik’s exit, Mr Lim said that he was not privy to the transaction but that both firms still work together.

This year is shaping up to be a challenging one for CSE, given the dual impact of the Covid-19 pandemic and the fall in oil prices.

CSE’s share price declined from over 54 Singapore cents in early-March to 32 cents about midway through the month. 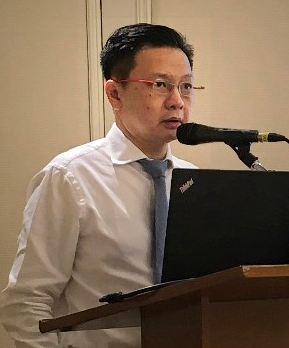 CFO Eddie Foo. NextInsight file photo“There were a lot of restrictions, not just in travel, but also with our customers’ sites, in the US, Australia and Singapore. That affected our ability to service our customers and hence also bill our customers for the maintenance work,” he said.

Even so, CSE delivered a strong set of numbers for H1.

It recorded a 47.7 per cent rise in earnings to S$15.1 million. This was partly because the firm had “the benefit of the incremental contributions” from recent acquisitions, Mr Foo said.

It also maintained its interim dividend from the previous year at 1.25 cents per share.