WHAT’S NEW
• “Corporate-governance issues” largely a non-event in our view. A news report that the company’s executive chairman Mr Ren Yuanlin was “assisting” Chinese authorities in an investigation led to a 42% slump in the company’s share price over the 2-15 August 19 period. 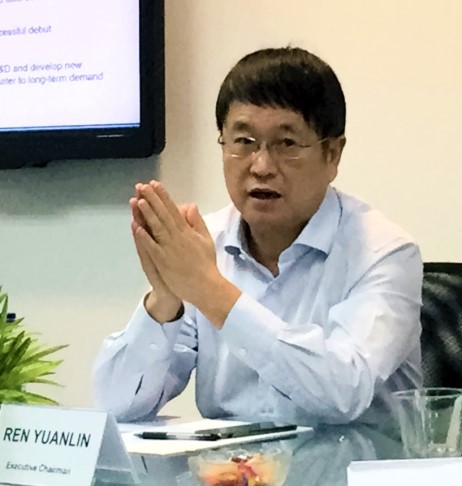 Executive chairman Ren Yuan Lin.
NextInsight file photoYangzijiang (YZJ) pointed out that neither Mr Ren himself nor the company is under investigation – instead he is assisting the authorities as there is alleged financial impropriety at one of his China-based charities, managed by an individual who is not an employee of YZJ.

As a result, Mr Ren is on leave from YZJ and presently does not have an active role in the company.

• Current management has the experience and expertise. Mr Ren Letian, the CEO of YZJ for the past five years and the son of Mr Ren Yuanlin, has been with the company since 2006 in various roles and importantly, he headed the company’s Yangzi Xinfu shipyard.

We understand that he is an extremely hands-on manager with detailed knowledge of shipyard and shipbuilding operations, and thus the core business will not be affected in the absence of the company’s chairman, in our view.

While no contract value was disclosed, we estimate this order at approximately US$250m.

YZJ noted that newbuild enquiries in 2H19 has been stronger compared to that in 1H.

We have 2939 guests and one member online