CHASEN: Progressing towards spin-off of 2 subsidiaries 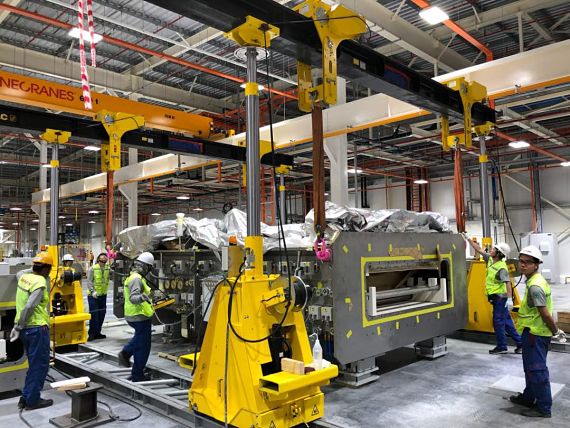 Chasen workers relocating sophisticated machinery. This requires state-of-the-art material handling equipment and specialised worker skills. Photo: Company
On the attractive fundamentals of the Chinese subsidiary for a listing, Mr Ng pointed out that it has been in operation for some 15 years, carrying out a very niche business.

Chasen, which reckons that it has only two competitors in China, targets customers which are flat-panel display manufacturers and semi-conductor manufacturers, among others.

As for the Malaysian subsidiary, Mr Ng noted that it has achieved revenue of between RM30 million and RM40 million a year -- sufficient for a spinoff. And it is profitable.

This subsidiary carries out third-party logistics services across land borders in both directions. It is unusual in that its trucks, instead of being domestic-focused, traverse multiple countries -- Singapore, Malaysia, Thailand, Vietnam and China.

If and when the spinoffs materialise, the unlocking of value could help Chasen exit the SGX watchlist (Minimum Trading Price, or MTP) by the June 2020 deadline set by SGX.

The SGX criteria to exit the MTP Watchlist are, simply put, a market capitalisation of at least S$40 million (currently S$34 million) and a stock price of 20 cents (currently 8.8 cents).

Asked if there is a fallback plan if the spinoffs are not achieved for whatever reason, CEO Justin Low said Chasen has until the end of 2019 to consider moving its current listing on the mainboard to Catalist.

The FY19 results announcement is here.

We have 360 guests and one member online