Jin Hou Soo, who lives in Melbourne, contributed this article to NextInsight

The fall in Sunpower’s share price may be due to a private dispute between Mr Guo Hongxin and Mr Ma Ming (executive chairman and executive director respectively), versus America 2030 over a loan.

Recently, the company announced that the 28 million shares (equivalent to 1.9% of the total issued shares) that the former pledged to secure a loan from America 2030, had been illegally transferred out of a designated account.

A restraining order was obtained preventing America 2030 from selling the pledged shares, and both sides erupted into a war of words in the public domain.  Statement from both sides can be found at:

I’m not privy to the details of conflict, but with the Midas scandal still fresh in everyone’s mind, the sell-down may be due to renewed skepticism towards S-chips on SGX.  America 2030 may have even sold shares surreptitiously before the restraining order was obtained.

However, since the sparring between both parties is private and not related to the operation of the company, the sell-down presents an opportunity to gain exposure to a potential multi-bagger, according to analysts from UOB with a target price of S$0.77 and Lim & Tan with S$0.95.  Their reports can be found at:

Since the analysts' initiation reports are quite comprehensive, I intend to do only a quick run-through on the businesses of Sunpower.  Sunpower is in essence a chemical engineering solution provider.  Their original businesses are divided into Environmental Equipment Manufacturing (EEM), and Engineering, Procurement and Construction Integrated Solutions (EPC).

The difference between the two, from my understanding, is that the former is a provider of parts, and the latter of systems.  Quite obviously, there are plenty of overlaps and EPC do get parts from the EEM.  It is my understanding, that both businesses have since been classified as Manufacturing and Services (M&S) from 2018 onwards.

Sunpower specializes in environmental engineering technologies.  Its solutions are generally applicable across different industries.  As a result, it serves a myriad of customers, and they are oil & gas players like CNPC, SINOPEC and CNOOC, as well as chemical players like ChemChina, Shenhua Group and GCL-Poly.  It also serves multinationals such as BP, BASF, Shell, SABIC, DowDuPont, Bayer, Exxon Mobil, Alcoa and Calenese.

Circa 2016, the company saw the opportunity to transform itself from a contract-based EPC player, to a stable, concession-based utility player by utilizing its clean coal technology to meet the government’s directive to improve air quality.

In a 2015 report, the Chinese government has identified small, unregulated boilers as one of the culprits of air pollution.  These boilers generate steam for factories, and due to their small scale, are neither efficient nor clean.  To replace them, Sunpower undertook built centralized plants to supply steam and/or electricity to factories that meet stringent environmental standards.  With this, the Green Investments (GI) segment was formed.

It is touted as to be the new growth driver of the company, which has guided for double digit internal rate of return (IRR), and that the net present value (NPV) of GI projects is attractive.  Unfortunately, specific numbers have not been given.

GI projects are typically based on the build-operate-transfer (BOT) model with concessions of 30 years.  According to analysts, due to Sunpower’s first-mover advantage, customers have no alternative after the central government mandated the closing of inefficient boilers.  Thus, they are in a superior bargaining position where payment is required upfront before the steam taps are opened.

The company is able to capitalize on this opportunity because its technical prowess.  It holds 143 patents and claims that its competency lies in:

As a result of its technical competency, Sunpower claims that its steam distribution system is much better than the competitors’:

Similarly, Sunpower can meet emission standards meant for natural gas power plants, even though they are burning coal:

With such an illustrious list of technological innovation, Sunpower is poised to seize opportunities from China’s clampdown on air pollution.  However, the capital outlay for concession-based BOT projects is huge.

To this end, Sunpower issued a total of US$180m worth of convertible bonds to two of the largest private equity funds in China, DCP Capital Partners and CDH China Management Company Limited.  The conversion prices of the bonds are favorable to retail investors, for they range from S$0.50 to S$0.80, which are sharply higher than the current share price.

The coupon rate is 2.5% per annum, which is much lower than the double digit IRR the company has guided.  The bonds mature in 2022.  The company has also issued warrants to the same parties to raise about US$30m if the warrants are converted.  The conversion price is S$0.70 or S$0.80 and the warrants expire on 31/12/2020.

The assets for the GI segment are parked under “intangible assets”.  Over the past 2 years, the company made huge investments into this segment.  The growth is captured in the table below, and equity is also shown for comparison:

According to the latest quarterly report, the investment into GI segment has grown so rapidly it is now equivalent to the company’s entire equity.  It is only in 2018 that the financial numbers in this segment start to trickle in.  Readers should note that there is no y-o-y comparison for this nascent segment.

As a new segment, the first year growth is impressive.

GI growth visibility is excellent with RMB382m worth of projects under construction and another RMB2,503m in the pipeline.  The company has also guided that M&S order book was a record RMB2.2b as at end-September, up from RMB2.0b at end-June, and double that from 1.5 years ago in February 2017 at RMB1.1b.

Next, the company has highlighted that GI projects generate superior cash flow. The following table shows operating cash flow before movements in working capital for the past 2 years.

In addition to the obvious improvement y-o-y, 3Q18’s cash flow before movements in working capital is a whopping 4.6% of the enterprise value of the company.  While it is impossible to tell if the improved cash flow is due to the GI segment, it does provide some evidence to support the management’s claim.  However, free cash flow is not expected to turn positive anytime soon with heavy capex into GI and increasing orders for M&S.

Sunpower has a market capitalization of S$229m at a share price of S$0.31.  The issued bonds are even larger than the company’s market cap.  As a result, valuation is difficult because the income statement is heavily distorted by non-recurring contributions from the bonds such as unrealized foreign exchange translation, amortised interest expenses and fair value gain/loss on the bonds.

Even though GI is exciting, Sunpower’s mainstay is still the M&S segment.  Since GI only appears from 2018, M&S is easily separated by analyzing pre-2018 periods. 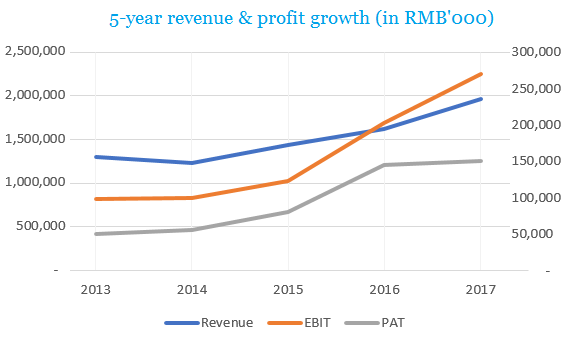 At the current share price of S$0.31, the financial metrics based on 2017 annual result is as follows:

The numbers suggest that even without GI, the current share price offers considerable value for M&S.

Q4 will likely be even stronger than Q3.  Other than it being the seasonally strongest quarter, Q4 will capture the full contribution of:

Readers should be mindful that the conversion of the bonds to ordinary shares will be highly dilutive.  However, they is not due until 2022.  It is the author’s hope that the growth trajectory of the company would be aggressive enough to nullify the future dilution.

Readers should also be mindful that even though Sunpower’s technology nearly eliminates all noxious gases and fine particulates, carbon dioxide emission should be no less than typical coal plants since none of the disclosed technology involves carbon capture.

In closing, I will leave readers with this quote from Jim Rogers: “The Chinese government is spending huge amounts of money on alleviating pollution.  People in the pollution business are going to get rich.”

We have 982 guests and no members online