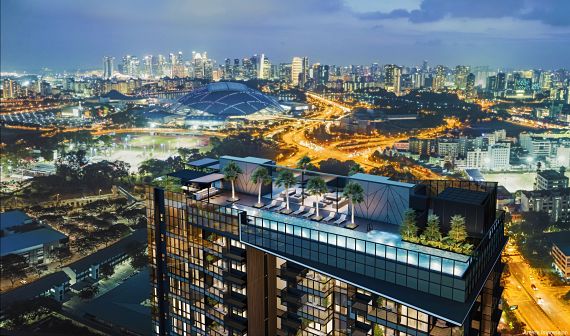 Arena Residences: View of the Sports Hub and city skyline from the rooftop of Roxy-Pacific's project which was 56% sold as at end 3Q18. It was launched in early Nov 2018.
Beefing up its recurring-income portfolio. Since the slowdown of the Singapore property market in 2013, Roxy had started to venture out of Singapore and expanded its horizons to build its portfolio of assets to improve recurring income and provide earnings stability.

In FY18, Roxy reinvested in three commercial buildings (two in NSW, Australia and one in New Zealand) for a total of S$117m, after divesting 117 Clarence St for almost double its acquisition price in 2016.

The properties are estimated to yield c.5% in Australia and c.6% in New Zealand. In addition, the group continues to build its hospitality segment, which will add to its recurring income. In FY17, the group acquired Tenmabashi Grand Hotel Osaka for JPY3bn. These properties will start to contribute from FY18 onwards.

The projects have all been substantially sold (95% sold) except for the last project launched in 3Q17, Art House at West End Glebe. The units sold have a total sales value of more than S$300m and could potentially contribute to FY19F-FY20F earnings.

We have 677 guests and no members online