ALLIANCE MINERAL ASSETS: Finally, on the verge of a merger with Tawana

Q: What are the significant milestones coming up with regards to the proposed merger of AMAL & TAW?

On 21 Sep 2018, AMAL shareholders unanimously (99.53%) voted in favour of the merger. On 9 Nov 2018, AMAL lodged the prospectus with Australia Securities and Investments Commission and submitted the application to the ASX for a listing under proposed stock code A40.

While AMAL has not made any announcement on the official approval, ASX listed AMAL as being among the upcoming floats and listings – indicating that AMAL's listing will be granted (https://www.asx.com.au/prices/upcoming.htm)

Hence, the last hurdle to the merger will be the TAW shareholder’s approval at an EGM starting 10.00am (AWST) on 27 Nov 2018 (Tue). Once that is achieved, there will be some minor administrative activities to complete the merger exercise by 14 Dec 2018.

Q: What are your thoughts on how the voting will go tomorrow at TAW?

In order for the Scheme to go through, TAW will need 75% of votes in favour of the merger. I did a simple simulation with 2 key variables:  the vote turnout+proxy (%) and (%) of Yes vote from non-major shareholders.

This simple analysis gives me a high level of confidence that TAW will be able to garner enough support for the merger, unless there is a large number of shareholders who disagree (with a total of at least 100m shares of "No" votes) which is unlikely.

The details of the simulation as follows:

It is not too realistic to expect the turnout+proxy to be 70-80% and almost impossible to make 90-100% of shareholders cast their votes (as some holds their shares through proxy/under brokerage custody and will be unable to vote directly).

b) (%) of Yes vote from non-major shareholders

Based on the previous scheme booklet sent out by TAW, we were told that the merger transaction is supported by 207.5m Tawana Shareholders holding (ie. major shareholders). Hence, the other variable affecting the merger will be the amount of Yes vote from the other (non-major) shareholders.

Personally, based on my ground feel of the TAW shareholder sentiments (having interacted with TAW management, and through multiple discussions in the Hotcopper forum & Twitter), I sense that a reasonably good percentage (>50% conservatively) of other non-major shareholders will vote Yes.

Conclusion: Even with 60% (or less) vote turnout+proxy and only 40% support from the non-major shareholders (which is highly conservative), the merger will get through. (For details of my calculation, click here for the table)

I have separate calculations and will not bog you down with that show that naysayers will need at least a total of 100m shares to cause the total approval to drop below 75%.

Q: How have shipments of spodumene progressed so far from Bald Hill? What is the near-term visibility like? 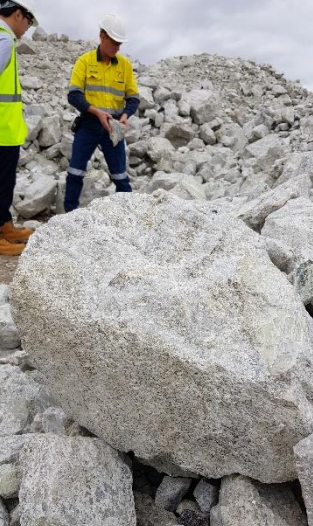 At Bald Hill: Pegmatites (rock-like objects) are mined and go through the plant facility to be processed into lithium concentrate.
Photo by KGI Research Based on the latest announcements from AMAL and TAW, production of Spodumene Concentrate has increased 63% from 17,403 wmt (Q4) to 28,419 wmt (Q1). With further improvements/optimization being introduced to mining & processing (such as additional excavator), we should see increased output in Q2 and beyond.

Below are the shipments from Baldhill (AMAL+TAW combined) since the commencement of production.

Hence, there is a decent stock pile of quality product sitting at Baldhill – which is normal during the initial period after the commencement of production.

Assuming all Q2 shipments are booked at USD 880/t (though we have been told multiple times that the average output from Baldhill have been around 6.2% grade, which should give us slightly higher revenue) and exchange rate of 1.38 for USD/AUD, the group (AMAL+TAW) should book A$42m+ of revenue for Q2.

And from the recent TAW presentation at a conference, the company has just shipped 20,000kg of tantalum to Europe. Assuming the Ta2O5 was sold at USD85/lb, 44,000lbs of Ta2O5 would provide the company with A$5.16m of Ta2O5 credits for Q2.

With the assumption that in Q2 the group produced the same amount of spodumene concentrate as Q1 and the major costs from AMAL Q1 quarterly report is a good indication of Q2 cost; ie

We should be able to report approximately A$10m profit before tax for Q2.

With the assumption that TAW has the same cost structure as AMAL, we should expect the merged group (AMAL+TAW) to report an estimated A$20m of profit before tax in Q2.

Further assuming TAW had a similar $3m loss in Q1 as AMAL, we are looking at estimated A$14m profit before tax for the group in H1-2019.

While A$20m net profit for Q2 may not seem massive, it is a critical inflexion point for the merged company – with many more good & better quarters of sustainable profitability and growth as

As for H2-2019, I would expect the merged group to be progressively producing closer to PFS output of 155kpta, and hence need to produce/ship 38,500t per quarter.

However, given the limited details on costs, it will be hard to properly estimate the profitability. Hence, for H2-2019, I would estimate the COGS based on reducing C1 cash cost including Ta2O5 credits (which is reasonable as the operations move towards steady state).

With that, I am estimating a net profit before tax of the merged group of approximately A$47m for FY2019.

Exciting times await Alliance Mineral as well as AMAL+TAW shareholders who stick around to be part of a growing global lithium producer.

We have 1611 guests and no members online