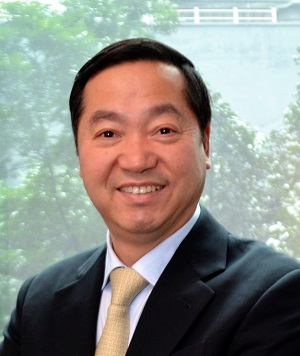 Guo Hong Xin, executive chairman of Sunpower Group. NextInsight file photo.Using that, we can go on to estimate the earnings accretiveness of Hengtong by comparing it with Sunpower's operating business without the effects of the CBs.

The above table gives the reported (or "actual") net profit of Sunpower to be RMB198.7 m.

This takes into account the significant effects of USD-denominated convertible bonds issued by Sunpower in March 2017.

What if the CB effects were not included in the net profit?

Then the table below shows how far more significant the Hengtong subsidiaries' earnings-accretiveness was vis-a-vis the operating profit of Sunpower in that period:

Note: Sunpower's financial statements give figures which reflect the effects of CBs and otherwise.

That 43% accretion could moderate (in other words, lower) in 2H18 as Sunpower's existing green investment businesses are expected to further ramp up and contribute proportionately more to earnings.

In other words, the green investment businesses will likely grow faster than the two Hengtong subsidiaries which still are expected to be a significant boost to Sunpower’s earnings.

That leads us to consider the growth rate of the full-year net profit for FY18 (without CB effects).

(A factor to note in 2H18 is, the CB effects will not include forex differences because during 2Q2018, Sunpower transferred the unutilised CB proceeds from its USD account to a RMB account.)

We have 424 guests and no members online