Food ingredients segment is the new darling. Food Empire’s upstream projects commenced operations in 2015, and have since made significant headway in their sales. Revenue from its other markets surged 43.2% YoY over 9M17 on the higher sales contribution from these new projects.

Since its food ingredients business’ advertising costs are lower, we expect its overall percentage of revenue spent on selling and distribution expenses to decrease over time. This would improve earnings growth in the near term.

Management cited that the ingredients business is a key driver of growth moving forward. We expect the group to continue building more upstream capabilities in the near future.

Russia and other CIS markets. Russia and other Commonwealth of Independent States (CIS) markets account for about 60% of Food Empire’s revenue. The gradual recovery of oil prices should lend more stability to the currencies and economies of these markets. 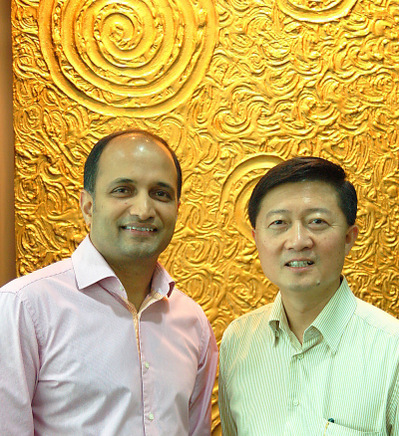 CEO Sudeep Nair and Executive Chairman Tan Wang Cheow. NextInsight file photoAs Food Empire has a leading market share in these markets, we believe the stabilising of these economies would help to reduce negative fluctuations in the group’s income.

Key risk lies in Caffé Bene. Caffé Bene is still in the red. As at 9M17, Caffe Bene dented the associates’ contribution by USD1.3m. As such, there could be a risk of asset impairments in 4Q17, if its performance does not improve.

We have 1857 guests and no members online