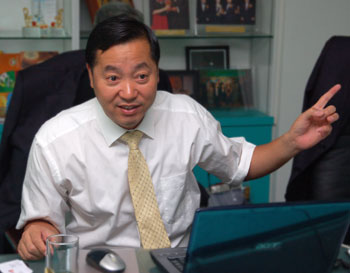 Guo Hongxin, executive chairman of Sunpower Group. NextInsight file photoSince its IPO in 2005, Sunpower’s topline and income base have generally been on an upward trend, from Rmb241m and Rmb18.6m respectively to sales of Rmb1.4b and net profit of Rmb81m in 2015, as it penetrated further into existing petrochemical, steel and transport industries.

The company recently gained three new contracts (a Rmb21m supply of flare systems to Yanchang Petroleum, a Rmb23m EPC contract from one of China’s largest coal companies and Rmb99m worth of equipment sales to several enterprises), which are projected to have a material impact in FY17, according to its recent announcements.

Recent penetration into green investments to provide recurring income base
Sunpower believes its future growth lies in green investments, and the company is currently evaluating more projects, including options to venture into sludge treatment.

Such green investments (BOT/ BOO/ TOT) typically require high upfront capex (estimated investment size of Rmb966m till date), for which the proceeds from the recent share placements totaling Rmb258m will come in handy.

In return, the company will grow its recurring income base by selling centralised steam and electricity to industrial customers, thus cushioning any volatility in its EPC business.

However, we highlight a key risk of BOT agreement lies in securing sufficient end-user uptake and collectivity of tariffs.

According to management, over 90% of Changrun end-users are print and dye companies with proven track record of operations, which could help mitigate such risks.

Decent balance sheet to support green investments and historical dividend yield of 0.2%
Apart from profitability, Sunpower has also consistently recorded positive operating cashflow (with the exception of FY05 and FY11).

With a net gearing ratio of 20.8% as at end-Sep 16, management believes there is potential to improve its current annualised ROE of 11%.

Notwithstanding the absence of a dividend policy, the company has been paying out dividends based on ~5% payout ratio, implying a dividend yield of ~0.2% on average.

We have 2000 guests and no members online