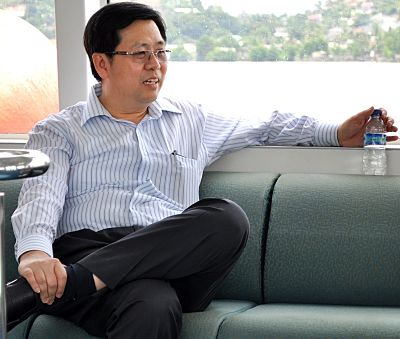 Ang Kok Tian, Chairman and MD of ASL Marine. NextInsight file photoThe interest rate for club term loan was not disclosed but Mr Ang Kok Tian, the chairman and MD, said in an interview with NextInsight that it's a "normal" rate. Neither were the identities of the lenders disclosed. Mr Ang said they have supported the company for many years.

ASL has provided a corporate guarantee and collateral in the form of some of its "moving assets" -- ie, shipchartering vessels.

Mr Ang added that the money raised is for ASL Marine's working capital, and it would place the company in a strong position vis-a-vis peers in securing contracts.

"Throughout the industry, there are liquidity, cashflow issues. There is a credit void. But there is good business to be secured, there are tenders in countries such as Indonesia, Middle East, North America and Europe.

"To tender, we need bank facilities, banker's guarantees, letters of credit. If bankers don't support, we can't produce all these and we will miss opportunities," said Mr Ang. "But if we can, we have a good chance to win many projects."

"Our focus is on building our business, so we can service and repay loans, etc."

In addition, with banking facilities, the company would be in a position to negotiate better terms from suppliers, such as lower prices.

To further expand its working capital, ASL has earlier announced a renounceable non-underwritten rights issue to raise up to $25 million. The book closure date is 24 Nov 2016. The controlling shareholders have undertaken to subscribe in full for their entitlements.

Fidelity Investments is among the top shareholders with a 8.02% stake.

We have 988 guests and no members online