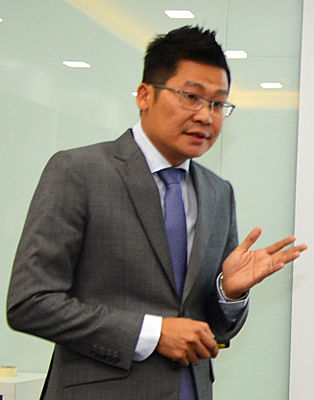 Deputy CEO Eric Low co-founded Oxley Holdings with Ching Chiat Kwong, the executive chairman and CEO. Photo by Cheng Kam Him. There's a building that bears Oxley Holdings' name in the CBD of Singapore and which Oxley has reserved three levels for its own use.

Sitting on freehold land in Robinson Road, Oxley Tower will achieve TOP in Nov or Dec this year.

"It's a project we are particularly proud of. It will contribute more than S$500 million to our topline, and give our balance sheet a big boost," said Mr Low.

The sum is attributable to the sales achieved for the 32-storey building, except for three floors (12 units) reserved for the company's use.

Oxley Tower is one of eight projects expected to achieve TOP in the next 12 months and will result in a S$2.1 billion revenue recognition for Oxley.

Besides an expected final dividend for FY2016 (ending June 2016), the cash inflow will go largely to repaying borrowings. These are substantial and have dampened investor enthusiasm -- understandably so, when the stock has a 3.5 debt-to-equity ratio.

Beyond that 12-month period, it had S$1.35 billion borrowings outstanding.

Aside from Oxley Tower, another big contributor will be its 100% owned Royal Wharf project along the River Thames in London.

Townhouses and apartments from Phase 1 will be progressively handed over to buyers from August 2016 to mid-2017 and Oxley expects to recognise approximately £400 million in receivables upon completion.

"We told people we aimed to get TOP within two years, and true enough, we are getting it for Phase 1 next month. Whatever we told investors in the past two, three years, we have delivered. It's our precise execution."

The presentation materials are here.

We have 339 guests and no members online